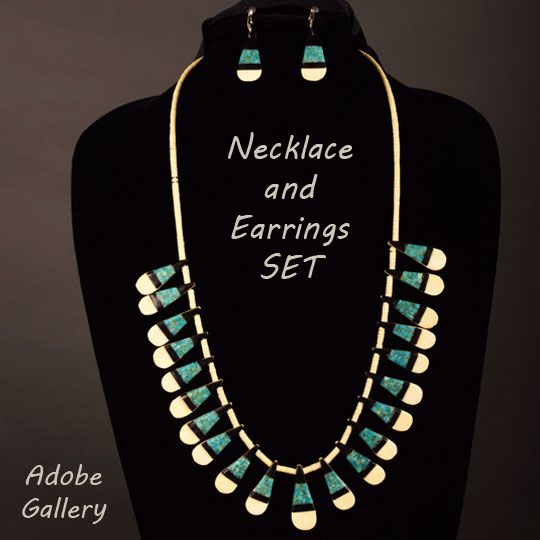 Santo Domingo Pueblo depression-era necklaces, as they are called, are creations made solely for sale to tourists and others using found objects. There was never any attempt to wear them by the makers. They apparently got their start during the depression of the 1920s-1930s when times were tough for everyone and particularly for the pueblo population. They continued to be made into the 1950s because they were very popular folk-art pieces.

Materials used were those that could be found without purchasing anything. When used, black backing for the pendants has been stated to be from automobile battery casings, and white, as in this necklace, often from bone or plastic. Red was from any source of plastic. Turquoise was real and the tubular beads generally were from bones.

This necklace comes with a pair of matching earrings. Each tab has white backing likely to be plastic, on which are mounted strips of jet, and turquoise bits applied in mosaic inlay style. The earrings are provided with screw back attachments but could easily be changed to wire hooks for pierced ears. The necklace is strung on a cotton string.

It is difficult to place a date on these as there was very little change over the decades. It is safe to say that most of them date between 1930 and 1950s. This is a particularly nice one and it probably dates to the later period.

Provenance: this Kewa Pueblo Depression Era Necklace and Earrings SET is from a private collection