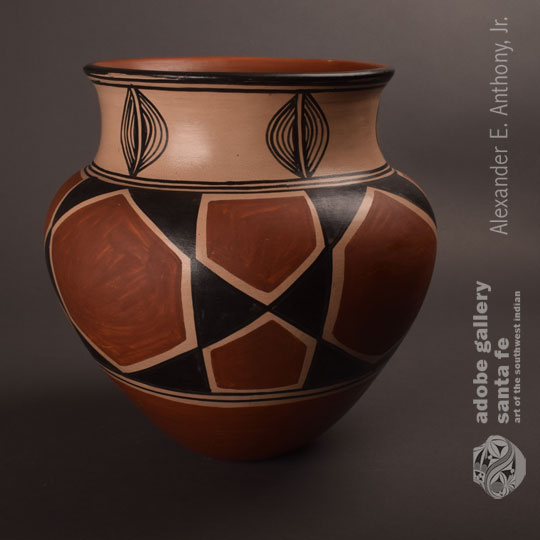 This jar is something of a transitional piece from the Black-on-cream typology previously made by the two Aguilar pottery sisters from Santo Domingo Pueblo. Here, they applied their new design idea on the body but retained the old Black-on-cream style around the neck.  The Adobe Gallery 2003 exhibit of the sisters’ works did not include a piece in this transitional style. Perhaps it was a short-lived idea, before the transition to an all black-and-red-on-cream design occurred.

This jar is an excellent example of the transition between two design styles.  The newer style was a work in progress—a departure from the many years of producing Black-on-cream pottery designs. This appears to be an early example of what would become their most recognizable style.  The combination of the two styles is unusual and striking. The potters chose a dynamic yet simple design for the neck, with black lines expanding outward from two black parallel lines over a cream background.  The design appears to be in motion. The static mid-body design features strong brick-red geometric elements, outlined by a cream background and separated by black triangular elements. The lower body is traditional brick-red stone polished coloration, with a bottom that is slightly concave.

Framing lines at the rim, between the neck and body, and below the body design all are penetrated by a traditional ceremonial line break—a device that is used constantly in Santo Domingo pottery.  “Every pot is the abiding place of a spirit which is manifested by the resonance of the vessel when tapped, and that to curb its freedom of exit and return by painting completely encircling lines is to endanger the vessel, which may be broken through the efforts of the spirit to pass these barriers.” (Chapman, 1936:33)