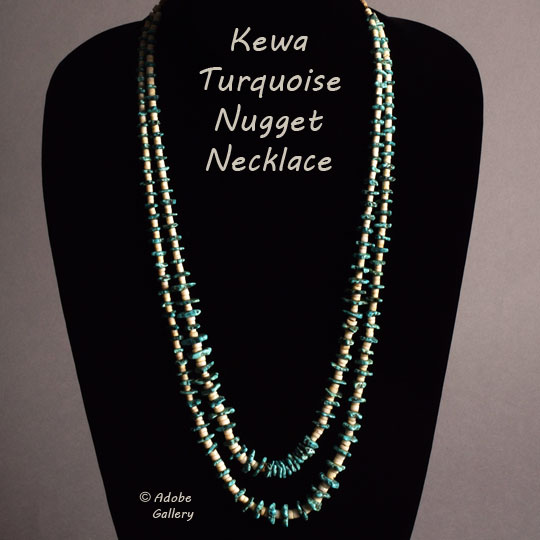 This two-strand traditional pueblo necklace has two white shell heishi beads inserted between each of the small turquoise drilled cabs. Additionally, a large group of the turquoise cabs are stone-to-stone without heishi separating them. The two strands are tied together and finished with a pueblo wrap.  A Pueblo wrap is string wrapped around and coiled tightly - usually used in necklaces to secure them (see image below).

This necklace is typical of those from the mid-1950s by artisans from what was then Santo Domingo Pueblo and now, Kewa Pueblo. The white shell heishi was formed from seashells which were cut into small squares, drilled with a hole, strung on string, and then sanded by hand to produce round beads of uniform size. The heishi was then restrung with small turquoise gemstones which were drilled and inserted. The strands were tied together and bound with string in pueblo fashion.

This style necklace is centuries old. Archaeologists discovered caches of turquoise and shell necklaces at Chaco Canyon, evidence that the ancestors of today's Pueblo people were using turquoise nuggets and shells as items of adornment over one thousand years ago. And from the earliest of times, turquoise has been favored by the Pueblo Indians of the Southwest. They mined it at Cerrillos, about 30 miles south of Santa Fe, for centuries. Turquoise had religious, ceremonial, superstitious and economic values to the Pueblo Indians.

Historic photographs show such necklaces hung over the neck of a deer mounted on one's wall. When the dancer was not wearing the jewelry, it would then be hung around the deer's neck. It is not unusual to see necklaces such as these still being hung around the neck of a mounted deer in a pueblo home. It is a sign of respect for the deer.

What is Heishi? it is made from coral, turquoise or seashell. The shells or coral are first cut into small square sections, drilled in the center, strung on wire or string, then sanded by hand, in an up and down stroke, until each one is round. That sounds easy but is not. It is important to exert the same pressure on every stroke to achieve heishi of the same diameter when finished. The shell is punched out in a square shape, hole drilled through center, strung, and then sanded to the diameter it needs to be. According to the Indian Pueblo Cultural Center, the beaded tradition is most closely associated with Santo Domingo Pueblo, known for creating beautiful shell and gemstone beads by hand. These beads are called "heishi," which means "shell" in the Santo Domingo language Keres. Necklaces with similar bead styles have been found in the ancient Anasazi sites Chaco Canyon and Mesa Verde, and heishi may be the oldest form of jewelry in New Mexico. Traditionally, heishi beads are smooth flat discs, but today the term is used to refer to any small beads that are strung together. Note: Sometimes the word is incorrectly seen as heishe. Think of "e" before "i" and you have the correct way to spell this word.

Provenance: this Santo Domingo Two Strand Turquoise Nugget Necklace is from the collection of a client