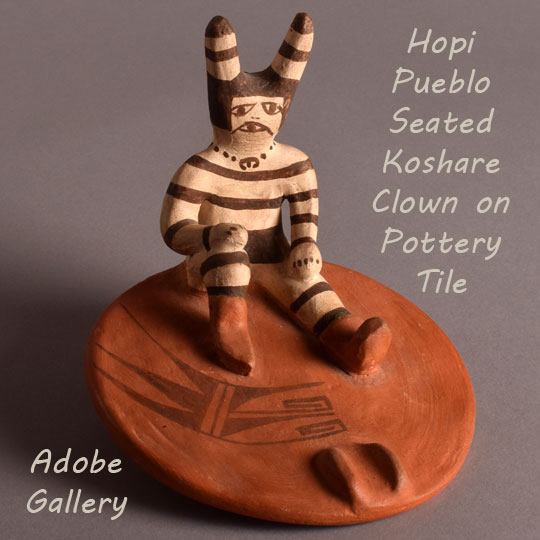 This seated Koshare Clown would certainly have been a choice item for a tourist, particularly if that tourist had visited a Hopi Pueblo ceremony and seen Koshare in person.  He is seated on a round tile that hints at being a pen holder. A very typical Hopi pottery design was painted on the tile, but the Koshare pottery figurine was the drawing card.

The development of tourist pottery from the Hopi Pueblo has several responsible persons.  Certainly, one of the earliest influences on Hopi potters encouraging them to make tourist items was Thomas Keam, trader at Keams Canyon. Keam was an astute businessman. He was satisfying the needs of museums and collectors. When The Fred Harvey Company started conducting automobile tours to the Hopi Mesas, Keam found it lucrative to have souvenir items for those visitors.

A second strong influence on Hopi potters was The Fred Harvey Company which had built a replica Hopi house at the Grand Canyon and had gift shops in its hotels along the AT&SF Railroad.  The company needed hundreds, if not thousands, of small souvenir-like items to fill its gift shops.

With the advent of Route 66, the Mother Road from Illinois to California, began to fill with souvenir shops, motels with gift shops, and automobile service stations with gift counters.  All these venues needed items to sell and many of the managers knew what they wanted based on past sales. So, the potters at the pueblos produced what was asked for.

What is a Koosa or Koshari? a very important figure in Pueblo society seen as a black and white striped clown who demonstrates to the children "what NOT to do" oftentimes through their actions. Don't smoke, drink, say bad words, treat others badly, or be lazy. They are oftentimes seen as leaders in a dance procession. The stripes of the Koshari are usually horizontal and not vertical (if viewed by non-native peoples).

Provenance: this Hopi Pueblo Seated Koshare Clown on Pottery Tile is from the personal collection of a gentleman from Santa Fe