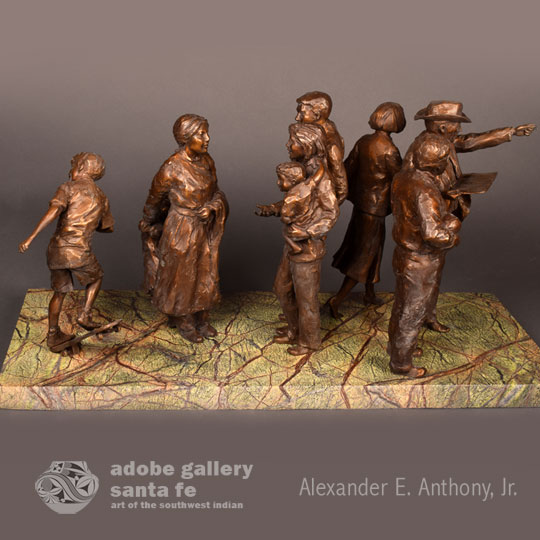 This bronze sculpture is a maquette of a large assembly of bronze sculptures located in downtown Albuquerque, New Mexico. The piece is titled "Sidewalk Society," and was intended by Glenna Goodacre to reflect "a kind of cross section of people you find on any sidewalk in America." The piece includes nine people altogether. There are men and women dressed for business, parents with their children, and even a young boy skateboarding. As always, Goodacre's depictions of these people are detailed, sensitive, and beautiful both individually and as a group. The largest of the figures in the downtown Albuquerque presentation stands at about seven feet tall. Here, it's about 14 inches, but the smaller scale does not detract from the energy of the scene. With "Sidewalk Society," Goodacre reminds us why she's regarded as one of the most important American sculptors.

The piece is signed and numbered—”G Goodacre 5/35”—on one of the figure’s legs.

Glenna Maxey Goodacre (1939- ) is an American sculptor who was born in Lubbock, Texas and now resides in Santa Fe, New Mexico.  Goodacre studied at Colorado College and New York’s Art Students League, beginning as a painter before moving towards three dimensional media.  She is best known for having designed the Vietnam Women’s Memorial in Washington D.C. and the obverse (or “heads” side) of the U.S. Sacagawea Dollar.  In 2003, she completed Philadelphia’s Irish Memorial, a massive public sculpture made to commemorate the many lives lost in Ireland during the middle of the 19th century.  Her works are included in many notable public, private and municipal collections around the country.

Goodacre’s works have received many prestigious awards and honors, and the artist herself has received many accolades from both her original and adoptive states.  She was inducted into the West Texas Hall of Fame and named 2008’s “Notable New Mexican” by the Albuquerque Art and History Museum.  She received honorary doctorates from her alma mater and Texas Tech University.  Unfortunately, Goodacre suffered a major head injury in 2007. She recovered well and eventually returned to work, though not without complications.  Goodacre officially retired from sculpting in 2016. She is considered by many to be one of the best and most important sculptors of her era.

Condition: this "Sidewalk Society" Maquette Sculpture by Glenna Goodacre is in good condition. The original base was broken and replaced with a new stone. A Boy's Albuquerque
by Kenneth Balcomb