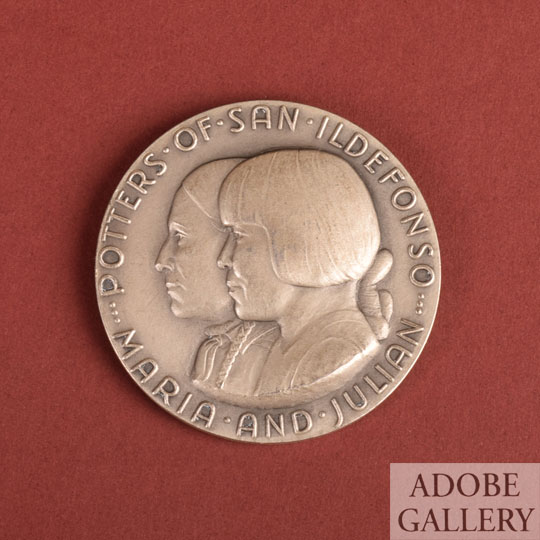 This coin was cast by the Medallic Art Company of Danbury, Connecticut most likely in the early 1970s.  On the face of the medal is a portrait of Maria Martinez partially overlaid on the face of Julian Martinez.  Around the circumference of the coin is written “Potters of San Ildefonso … Maria and Julian.” On the verso of the coin is a portrait of Popovi Da with the statement “Potter … Popovi Da … The Son.”  Around the outer rim of the coin is stamped “Medallic Art Co. N. Y. .999 + Pure Silver.”

We have not yet been able to determine who commissioned the commemorative coin, who designed it, and exactly what year and how many were minted.  The company’s records were burned in a fire so there is no documentation available. Charles King of King Galleries of Scottsdale and Santa Fe told me that he investigated the coin when he was writing the book on the family but was unable to find anything definitive.  He recalled seeing Tony Da wearing one around 1974-75 which had been converted to a pendant.