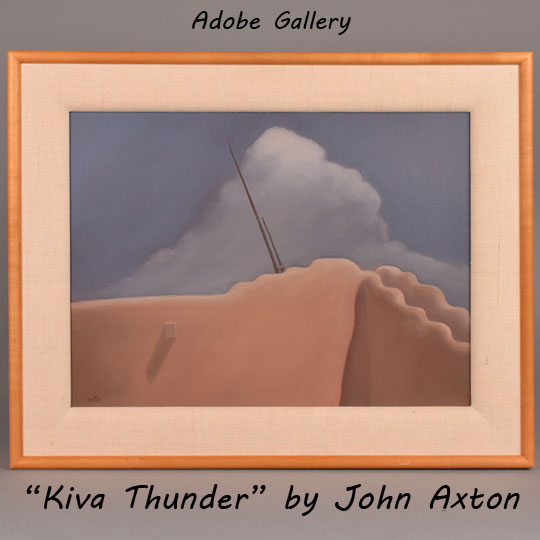 “Kiva Thunder” is an original oil painting by New Mexico artist John Axton.  The painting was completed in 1985.  Axton’s recent works are mostly abstract images, but we managed to find a few that are similar in spirit to this painting.  Axton seems to have a unique eye for moody skies and an unusual way of highlighting the beauty of Southwestern architecture. With “Kiva Thunder,” he explores both.

In the foreground, we see the titular kiva, with a ladder rising up from within.  Soft light covers a long, wide wall.  Shadows appear as this wall meets another.  In the background, a cloud formation rolls through a purple sky, carrying with it the thunder mentioned in the painting’s title.  The colors used for the kiva and the sky complement one another beautifully.  The image feels soft and beautiful, but the approaching storm adds an intensity that is implied rather than clearly depicted. “Kiva Thunder” seems simple at first glance, but it contains much more than meets the eye.

The painting is signed Axton in the lower left.  It is framed under fabric matting in a simple wood frame.  The following text is written on verso: “Kiva Thunder, Oil, 12” x 16”, Axton ‘85, Santa Fe N.M.”

John Axton (1947- ) is a painter who was born in Illinois but is now active in New Mexico.  He is a graduate of Southern Illinois University’s commercial art program.  In 1979, he moved to New Mexico to focus on his painting.  In the 1990s, he lived in New York and Montana, and eventually returned to New Mexico.  He is a skilled and accomplished painter whose works are included in prominent public and private collections.

Provenance: this original Painting titled "Kiva Thunder" by John Axton is from the large collection of an Albuquerque family