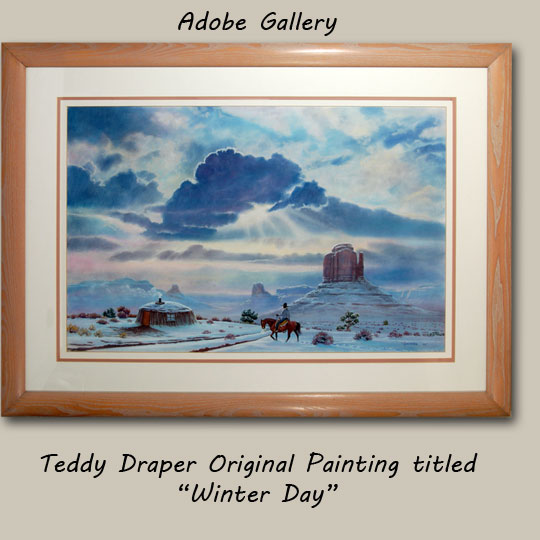 “Winter Day” is an original painting by Diné of the Navajo Nation artist Teddy Draper Jr.  It is a large, impressive piece that quickly and successfully draws the viewer into its world.  Anyone who has spent time in the Southwest during winter will recognize the feeling captured by this painting.  A snowstorm has come and gone, and the sun is emerging from behind thick clouds.  It sends its warmth and light out in bursts, creating a wonderfully warm glow within the passing storm clouds. With “Winter Day”, Draper captured that magic moment with incredible skill.

In the foreground, Draper created a Diné man on horseback.  They travel leisurely toward a hogan, where a warm fire awaits their arrival.  Further into the distance, snow-covered sandstone formations rise from the earth.  The man, the earth, and the hogan occupy less than a quarter of the large image, letting the sky work its magic up above.  Here, Draper blends white, blue, purple, and pink pastels together beautifully, creating rich textures with visible depth.  The clouds closest to the viewer feel sharp and energetic, and those in the background feel appropriately hazy, disappearing into white as they travel to their next destination.

The painting is signed Draper and dated ‘90 in lower right.

Teddy Draper, Jr. (1949- ) is a Diné artist who lives and works near Chinle, Arizona.  Draper was born October 3, 1949, on the Navajo Reservation. He is the son of artist and United States Marine Corps Navajo Code-talker, Teddy Draper, Sr., who served in the South Pacific during World War II.  He is known for his unique work in pastels. Draper has exhibited widely and won numerous awards for his artwork.

Provenance: this Teddy Draper Original Pastel Painting titled "Winter Day" was purchased from the artist in 1990 and sold to a client from whom we now have it back to sell again.