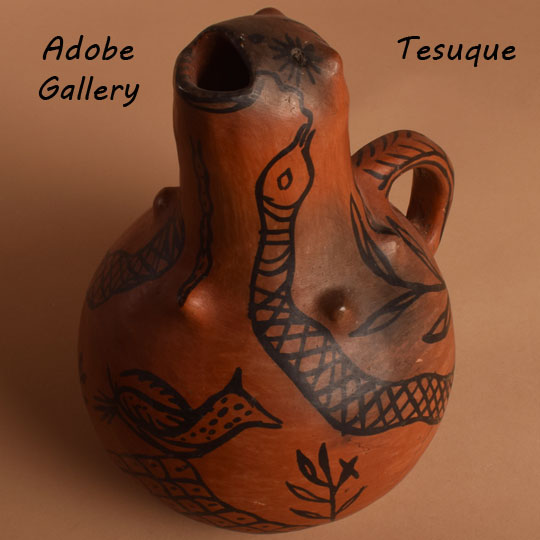 What generally comes to mind when one thinks of Tesuque Pueblo pottery are, first, Tesuque rain gods, then, secondly, garish poster paint tourist wares, and then, finally, very high quality Polychrome pottery.  Potters at Tesuque were very talented and produced some truly outstanding jars and bowls.  Probably the least pottery style from Tesuque, to come to mind for most collectors, would be Black-on-red Pictorial Animal Effigy Vessels.  That’s a long descriptive title but it accurately describes this vessel.

There were few Black-on-red vessels made at Tesuque and those that were made appear to date before 1880.  It is quite possible that Santa Fe dealer Jake Gold greatly influenced the output of Tesuque potters.  An 1880s photograph of Gold with many Tesuque pots appears to show only Polychrome vessels.  There does not appear to be a Black-on-red in the group.  It is quite likely that those that were made were discontinued around 1880 based on Gold’s preference for Polychrome wares.

This Black-on-red pitcher was probably suggested by Jake Gold to be made in the hopes that a tourist searching for something different and useable would purchase it.  It could have been used as a pitcher should a purchaser wish to do so.  The serpents, which are a major part of the design, would associate the pitcher with pueblo culture.  The bird, perched on top of a pile of seeds tends to soften the impact of the serpents.

When this jar first arrived at the gallery, the decision had to be made whether it was from San Ildefonso or Tesuque, both of which made Black-on-red typology pottery.  The clue to determining it was from Tesuque was the tan underbody clay.  Tesuque unslipped natural clay is generally bumpy and uneven to the touch.  That trait appears on this pitcher.  The nodules around the neck of the jar are another likely clue of a Tesuque origin.  I am not aware of any San Ildefonso pottery with such nodules.

This is quite a rare example of Tesuque pottery.  The fact that it is Black-on-red, is a pitcher, is an animal effigy vessel, and has pictorial design elements are rather unique individually but quite unusual when combined on a single vessel.