Untitled Pueblo Women on the Trail 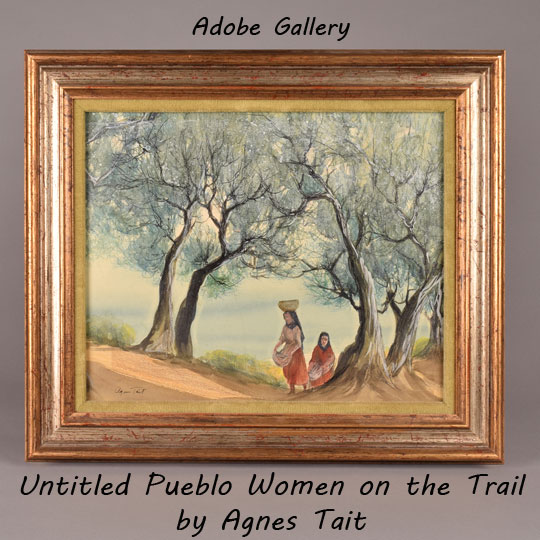 Agnes Tait (1894-1981) was born in Greenwich Village, New York City, in 1894. After graduating from grammar school, she applied to the National Academy of Design where she earned multiple awards for her work.

In 1927 she spent several weeks in a studio in Paris where she studied lithography at the École des Beaux-Arts before returning to New York City to rent her own studio in Lower Manhattan. Her first exhibition was held with fellow female artists and received a review in the New York Times. She continued to find success as an artist.

The Great Depression crashed the art market so, in 1933, Tait took a third trip to Europe, this time with her new husband, William McNulty, a recently unemployed writer. Upon returning to the United States, she began work on her most famous piece, Skating in Central Park, under employment from the Public Works of Art Project. The work's success led to further employment under theFederal Art Project, including small lithographic editions and mural work. Her mural Fruits of the Land (1941) was located in the post office in Laurinburg, North Carolina. (Disclosure) Laurinburg is the hometown of Al Anthony, where he was born and grew up and he does not remember the mural in the post office although he probably did see it on occasion.  The mural was removed from the post office in 1980 and sent to the National Museum of Art Storage.

Tait’s husband's health prompted the couple to relocate to New Mexico where she added Southwestern landscape painting to her repertoire, and after 22 years in Santa Fe she set out to find a new home. This was in part a result of her disappointment in being relegated to the status of "New Mexico Artist."  After spending time in Italy, Ireland, and Florida, she returned to Santa Fe to live out the rest of her life. Her work remains in collections such as the Library of Congress, Metropolitan Museum of Art, New York Public Library, among many others.

This painting does not have a title affixed but it appears to be two Pueblo women, one with a pot on her head, and both carrying in their aprons as if they have been out picking berries or fruit.  The painting is signed in lower left.

Condition: there is a scratch in lower right of insignificant scale.

Provenance: this painting - Untitled Pueblo Women on the Trail - is from the collection of a Santa Fe resident 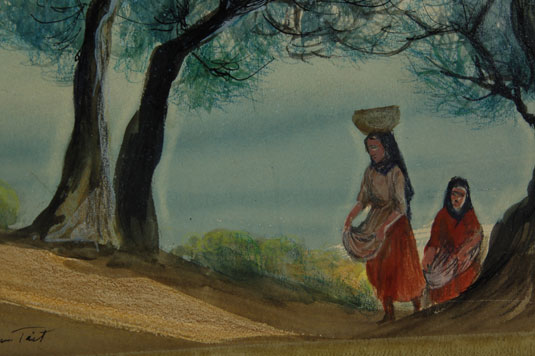 The Art of the Old West: From the Collection of the Gilcrease Institute [SOLD]
by

Treasures of Gilcrease – Selections from the Permanent Collection [SOLD]
by