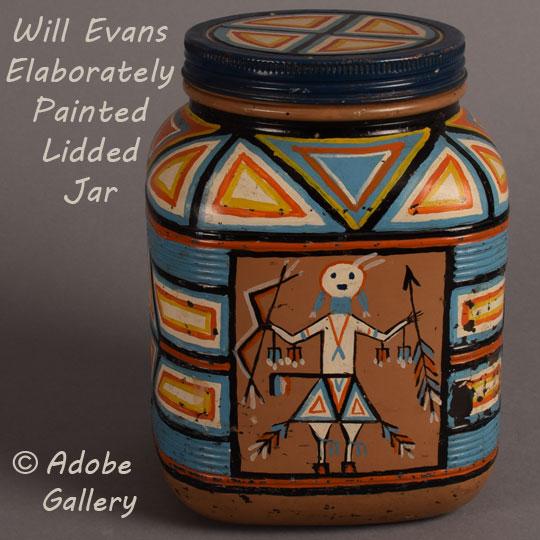 In 1892, at the age of 15, Will Evans and his family immigrated from Wales and settled in Salt Lake City, Utah. The family had converted to the Mormon faith in Wales and chose to move to the United States because of religious persecution in their country.

Will's father was a coal miner in Wales, but could not find such work in Utah. Hearing about coal in the San Juan River Valley, the family set out for Fruitland, New Mexico, in 1893. Will chose not to work in the mines with his dad but looked for other jobs. He found construction jobs where his fellow workers were Diné. His exposure to the Diné people set the course for his future lifestyle.

In 1898, Will was offered a chance to live on the Navajo Nation with two friends who were opening a trading post on the reservation at Shiprock, New Mexico. This led to a lifetime pursuit of studying Navajo culture. In 1917, Will purchased the Shiprock Trading Company from his friends, moved his family there, and began his career as a Navajo trader. Will was intrigued with Navajo religion and saw similarities to his Mormon religion. He witnessed his first sandpainting by a Diné medicine man and became intrigued.

Will attended many Navajo ceremonies, became friends with Diné medicine men, had an employee at the trading post who was an apprentice medicine man, and began to understand that changes were occurring among the Diné that would result in the loss of their religion. It was then that he decided to use his paintings to preserve scenes he witnessed in sandpaintings.

In the 1930s, Will began painting images on furniture and any other object he could find-bottles, wooden spoons, chairs, tables, lamps and lamp shades, buckets, pans, and anything in sight. He painted a mural on the exterior of the trading post wall. He became obsessed with recording images of sandpaintings as he remembered them.

This glass jar is an excellent example of Will Evans' artistic work. There is a single Yei figure on one of the four sides of the body of the jar. The Yei is framed in a box. The remainder of the jar was painted in designs of triangles of varying colors and sizes.

Provenance: this Will Evans Elaborately Painted Lidded Jar is from the collection of a client from Colorado

Recommended Reading: Painting With a Passion: Will Evans and the Navajo. A Farmington Museum Exhibit catalog, August 30, 2001 to April 21, 2002, Farmington, New Mexico. Folk Art from the Global Village: The Girard Collection at the Museum of International Folk Art [SOLD]
by Mary Wachs