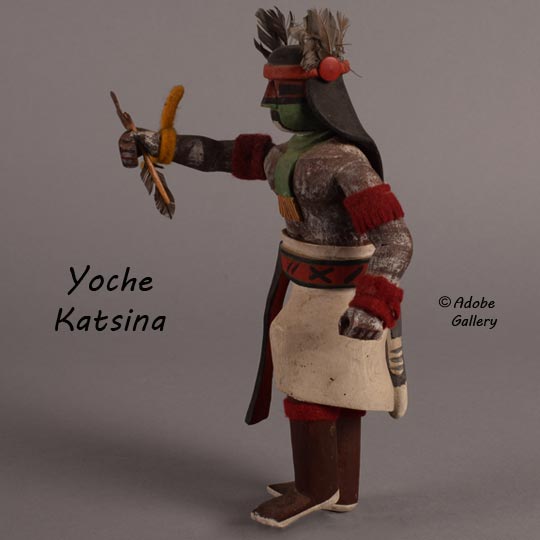 This Hopi katsina doll represents the Apache Indians as reflected in the Hopi ceremonial culture.  It is an all-wood carving embellished with yarn and feathers. The paint appears to be acrylic, dating the doll to circa 1950s. The carving was executed with excellent care and precision. The doll's torso is exquisite. The facial paint is a beautiful mixture of colors that work well together.

According to published information by Barton Wright, acknowledged expert on Katsina culture, the Yoche Katsina is a comic figure or caricature of an Apache Indian.  It may appear during the Kiva Dances both early and late, or with the Soyohim later in the year. A group of them frequently will appear in the Buffalo dances during the Katsina season.  Their actions are usually those that one would expect of Apaches on the warpath. They are often used in conjunction with the clowns.