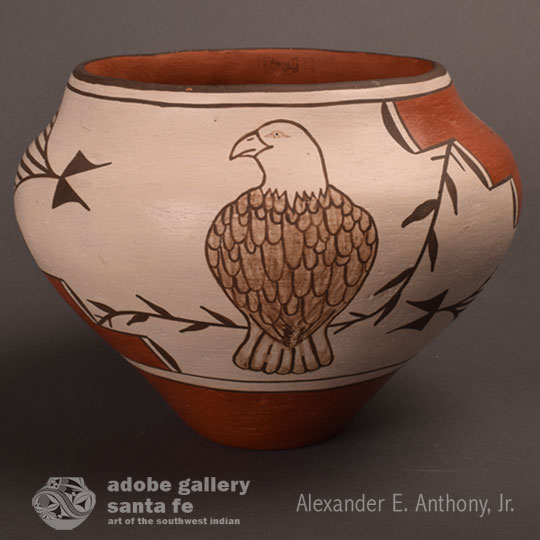 This Zia Pueblo pottery jar is emblazoned with a pair of exquisite eagles in realistic form.  The feathered bodies are toned in a light application of brown pigment, and the tail feathers and head are presented in outline form, without color.  A large and bold design of tipped feathers and parallel fine lines separates the two eagles.

None of the reference books we have relating to potters at Zia Pueblo show a listing for Edwina Pino.  It is assumed, then, that she is a younger member of one of the Pino families and has not yet been included in published references.  She is, however, quite talented, both in presenting traditional Zia designs and realistic bird figures.

Condition: a 1-1/4-inch vertical crack at the rim has been stabilized and does not preset a problem.  The jar rings beautifully.

THE FLAG IN AMERICAN INDIAN ART [SOLD]
by