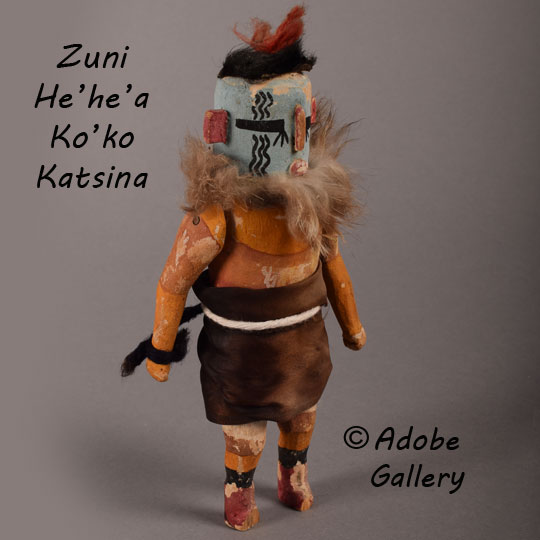 This He'he'a Ko'ko (Katsina doll) was made by an unknown Zuni Pueblo artist. It is a rare early piece, likely dating to the 1930s. Fabric, fur, nails, and various types of string appear in addition to the primary material of wood. Though modest in size, this carving has a powerful presence. Its age is visible, which is appealing with a piece like this.

The Barton Wright book on Zuni katsina dolls does not show an example of the Zuni version of Hopi Heheya, but it is likely that the functions of Zuni's He'he'a Ko'ko and Hopi's Heheya Katsina are similar or somewhat the same.

"Early in the Bean Dance time (Powamu) the young children of the villages can expect a visit from the terrifying figure of Soyok Wuhti and a couple of her ugly helpers. These individuals go from house to house where there are small children and leave a token and a warning with each child. Every girl is given a small amount of sweet corn and told to grind lots of cornmeal. The boys are presented with yucca snares and told to catch mice because the Soyoko are coming again in four days, and when they appear they will want meat and food or they will take the youngsters instead. When the Ogres do appear they present themselves in horrid array in front of a house and demand food and meat. It is held out to them on the end of a stick from behind a partially closed door. It will be instantly reflected as too little or the wrong kind, and the cold is demanded. With chilling detail the falsetto voice of the Soyoko then recounts faithfully the child's misdeeds and demands to be given the youngster. At this point some relative usually speaks up for the child saying that he or she has really learned not to do these things. But the Ogre is adamant and the child may have to demonstrate that he minds his parents and doesn't spill the water or whatever. This is done for the edification of the Ogres and the audience which stays well back from these ugly creatures. Finally the child will be ransomed with quantities of food which are dumped in the burden baskets on the backs of the Heheya, Wej-u-u, or the Toson Koyemsi. They trot off to the officiating kiva with their loads and then return for still more.

"When all of the houses in the village have been visited, the Soyoko return to the kiva where they find a dance in progress. This dance is a Butterfly or similar performance. Lured by the dance and the blandishments of the kiva chief, they join the dancers with hilarious results. The Soyok Wuhti stands aloof from this frivolity, and when members of her horde attempt to join the dance, she knocks them about with the butt of her cane. But growing more and more excited, the Heheya attempt to peer under the skirts of the young boys who perform as the women in the dance group. Amazingly the dance proceeds with almost no break in the rhythm. The kiva chief finally succeeds in enticing the Soyok Wuhti into the dance where she makes the most ludicrous mistakes, turning a half-turn too late or attempting to dance with the wrong foot. Her actions convulse the audience with laughter. While she is completely occupied by the dancing with the chief, the men of the kiva suddenly leap upon all these evil creatures and divest them of their ill-gotten gains, rushing into the kiva with the food. The last that is seen of the Soyoko is Soyoko Wuhti rushing, empty-armed and half-naked over the edge of the mesa. [Wright, 1973:73]

Provenance: this Zuni Pueblo He'he'a Ko'ko Katsina Doll c. 1930 is from the collection of a client from Texas