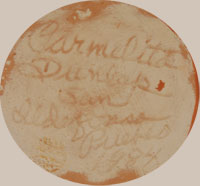 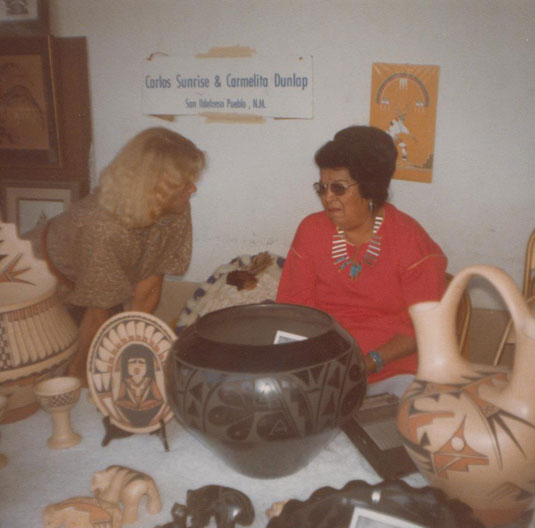 Artist Carmelita Dunlap, her son Carlos, and Blue Corn were the only potters at San Ildefonso Pueblo who regularly produced polychrome pottery.  Most other potters were producing blackware at that time.  Carmelita had three daughters, all potters, to carry on her tradition.

Carmelita Dunlap (1925-1999) was the daughter of Juanita and Romando Vigil of San Ildefonso Pueblo.  Her mother passed away when Carmelita was very young and her mother’s two sisters, Maria Martinez and Desideria Montoya, raised her.  She took turns staying with Maria for a few months and then with Desideria for a few months.  She learned to make Southwest Indian Pottery by watching Maria and Desideria at work.

Carmelita lived in California in the early 1950s while her dad worked for Walt Disney Studios.  In 1955, she moved back to San Ildefonso and began seriously focusing on pottery.  In 1974, she was one of the pueblo potters invited by President and Mrs. Nixon to visit the White House and one of her large pots was displayed at that time at the Smithsonian Institution.

Artist image from an unknown source and came with our item #C3646.