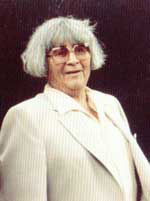 Hopi Pueblo artist Charles Loloma's impact on Indian jewelry design is unmistakable. He inspired a generation of young artists to express themselves in new and innovative ways. His own creations far exceeded anything being done by any other artist. His work ushered in a new era in Indian jewelry. In 1955, he started making jewelry after a successful career of making stoneware pottery with his wife Otellie. He experimented with lost wax, sandcasting and tufa casting. He became inspired while studying ancient Hohokam mosaic jewelry. It was then that he began creating gold and silver jewelry with exotic inlay materials.

By 1970, his jewelry was finding a wide audience of collectors. He had acquired a large national and international audience. Interest in his jewelry has continued today even though he has been gone for over two decades.

Charles Loloma (1921-1991) was born near Hotevilla, Hopi Pueblo Third Mesa to Rex and Rachael Loloma, of the Badger clan.