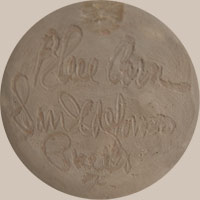 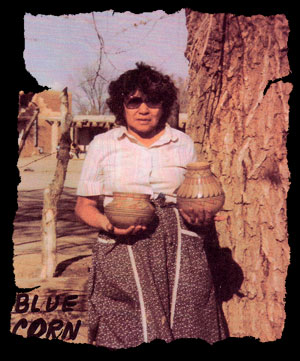 Crucita Gonzales Calabaza (1921-1999) Blue Corn was born in San Ildefonso around 1923 and was encouraged by her grandmother, at an early age, to "forget school and become a potter." She did attend school at the pueblo and later at the Santa Fe Indian School, however. At age 20, she married Santiago (Sandy) Calabazas, a Kewa Pueblo (Santo Domingo) silversmith. During the 1940s, she worked at Los Alamos as a housecleaner for J. Robert Oppenheimer. Shortly after World War II, she took up pottery making and found her calling.

It was always a pleasure to visit with Blue Corn at her home at the pueblo. As busy as she must have been, she never rushed one out of the house but casually and pleasantly visited until the visitor was ready to leave. It's always a pleasure to see her red jars as they are rarer than her black and polychrome ones. -AL Anthony

Image Credit: Blue Corn (Crucita Gonzales Calabaza) image courtesy of Garry and Susan Zens. All images subject to copyright.  Do not use without permission.