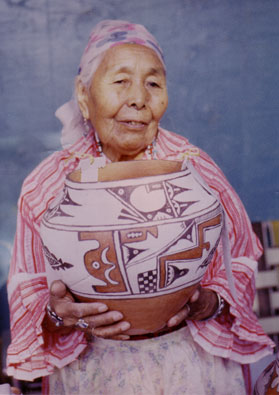 Eudora Montoya is the most well recognized potter from Santa Ana Pueblo. It was she who, in 1972, began teaching Santa Ana women the art of pottery making. She had 17 students in her first class. Only 5 or 6 of them continued making pottery. I don't believe any are still active today. Although Eudora's pottery was traditional in materials and construction, generally her designs were creations of her own.

In 1988, Indian Market Magazine honored Eudora Montoya (1905-1996) in a feature artist's profile: "Eudora Montoya is a small, self-effacing woman, but as a bearer of Pueblo Indian culture her contribution has been larger than life. Through her efforts and the knowledge she safeguarded, the centuries-old tradition of Santa Ana-style pottery, once in danger of extinction, remains vitally alive."

Artist Image Source:  original photograph found inside one of her pots