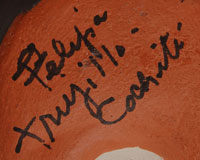 Cochiti Pueblo artist Felipa Trujillo was one of the earliest potters to make storytellers.

Before Helen Cordero's first storyteller, female figurines were made by potters at Cochiti and they have been named Singing Mothers or Singing Ladies. In the book The Pueblo Storyteller by Barbara Babcock, there is a Singing Mother figurine which Babcock says pre-dates 1930.

She further states that "The shape of her head and ears and her 'coffee bean' eyes are remarkably similar to figures made by Felipa Trujillo in the 1960s and 1970s." If this is the case, then Felipa Trujillo must have been one of the earliest Cochiti potters to do so (before 1930).

Babcock also states that Trujillo began making storyteller figurines in the mid-1960s. We know that Helen Cordero made the first one in 1964, so Trujillo must not have been far behind her. Trujillo was one of the seven artists represented in the Museum of International Folk Art exhibit "What is Folk Art?" in 1973.

Felipa Trujillo (1908-1986) was married to Paul Trujillo. They had a daughter, Josie Hand, who also was a potter.