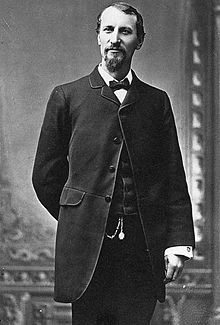 Arriving from England in 1850 at the age of 15, Frederick Henry Harvey worked as a dishwasher before creating the very first chain of hotels in the United States.

By 1887, the Santa Fe Railway was struggling through the difficult Colorado and New Mexico terrain to compete with the more mature Union Pacific and Northern Pacific routes and emerged from the depression of 1893 as a major line. The travelers of that era moved through Chicago on a slow journey Westward on hard board seats in overcrowded, crude coaches. At a time when most railroad food was poor and even inedible, Fred Harvey provided appetizing meals in comfortable dining quarters. He opened his first railroad restaurant in Topeka, Kansas in 1876.

Fred Harvey's restaurant business coincided with the dramatic changes that took place in a growing America. The new railroad sliced through the primeval grazing grounds and hunting routes of the Plains Indians. Fred Harvey's rest houses became gathering places for visitors who were searching for mementos of Indian land and the Native residents of some of the West's most striking cultural and geographic terrain. Perhaps more than any single organization, the Fred Harvey system introduced Americans to the New America.