Artist Fritz Scholder vowed early in his career never to “paint the Indian.”  Traditional flat-style paintings being made by Natives were, in his opinion, crowd-pleasing efforts that lacked originality.  Anglo-American artists’ paintings of Natives bored him too, with their romanticized portrayals of an idealized Indian.  An abstract painter with postmodern sensibilities didn’t fit into any of these roles.

After moving to Santa Fe to teach painting at the newly-established Institute of American Indian Arts, Scholder found himself immersed in Native culture and engaging with young Native artists for the first time.  He attended pueblo dances and began adding pieces of Indian art to his collection.  He was inspired by the forward-thinking young Native artists he instructed at IAIA.  Ultimately, he rescinded his vow and decided to “paint the Indian” in a way the Indian had not been painted before. 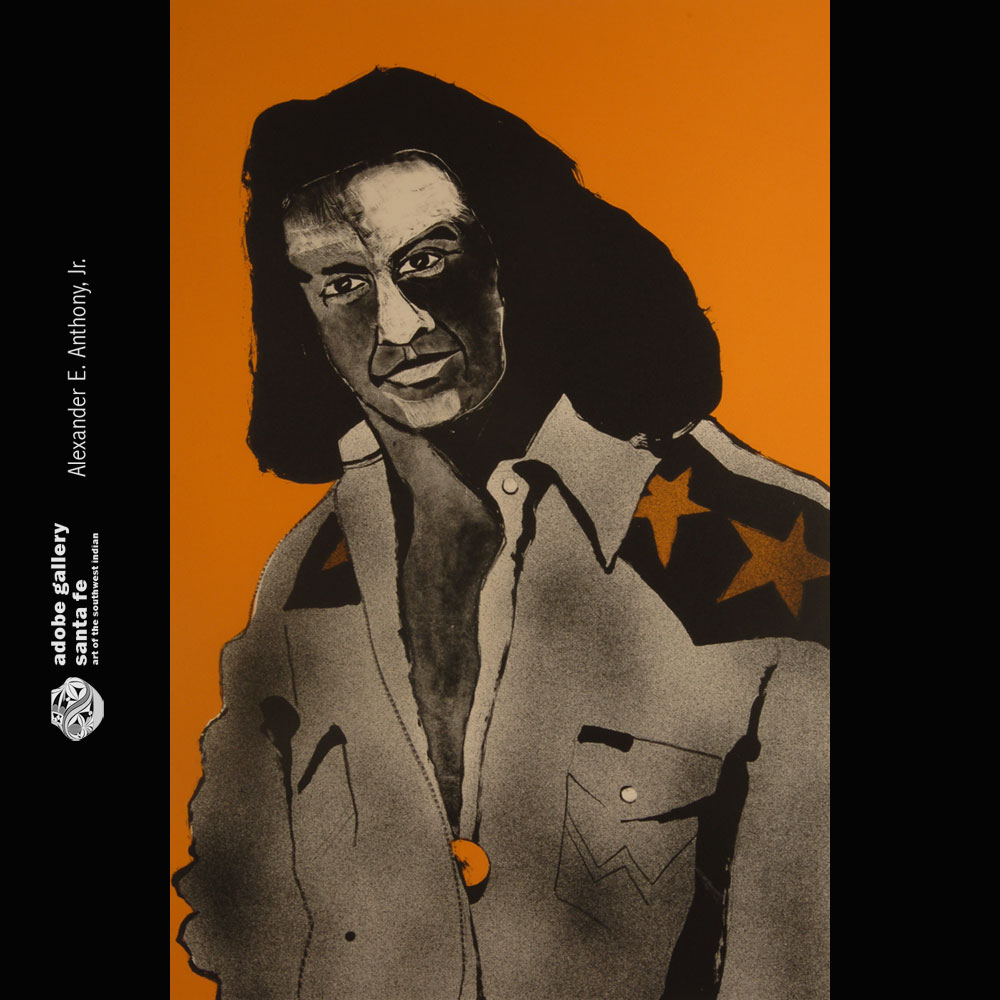 Fritz Scholder (1937-2005) was a contemporary American artist who was by birth one-quarter Luiseño Indian, a California Mission Tribe. He was born in Minnesota, spent two decades in the Dakotas, and lived in Galisteo, NM and Scottsdale, AZ. Scholder came to Santa Fe in 1964 to teach advanced painting and art history at the new Institute of American Indian Arts, a school established by the United States Department of the Interior. He had obtained a Masters of Fine Arts degree at the University of Arizona in 1964 before moving to Santa Fe and the Institute.

Scholder’s paintings and lithographs from this productive period are, nearly fifty years later, as fresh and exciting as when they were created.  The controversy stirred up by his more jarring images—Indians drinking alcohol, a pueblo dancer eating an ice cream cone while dressed in ceremonial regalia—came and went quickly, as the works are honest, kind and open-minded in spirit.  Scholder wasn’t condemning the Indian for adapting to life in the twentieth century.  He was telling stories, telling jokes, and sharing anachronistic images.  He was telling the truth, or at least he was telling his version of the truth.

In the summer of 1970, a company named Tamarind moved to Albuquerque from Los Angeles. It was already well known as America's foremost lithographic workshop for a decade by then. In Albuquerque it was housed in a building adjacent to the campus of the University of New Mexico. Once established in New Mexico, Tamarind selected Fritz Scholder as its first New Mexico artist to produce lithographs at its new facility.  Scholder had a long and productive and very successful career with Tamarind. Over several years, he produced 92 lithographs at Tamarind. Lithography was well suited to the talents of Scholder and he rapidly won international acclaim for his work in that medium.

Scholder passed away in 2005.  His widely influential works as a painter, printmaker and sculptor are displayed in museums around the world.