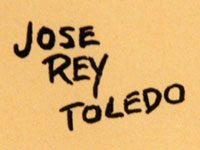 Jemez Pueblo artist José Rey Toledo is listed as having been an art instructor, education health specialist, administrator of Indian health programs, actor, educator, lecturer, muralist, and painter. It is this last category-painter-that is of interest to us. Toledo, as a youngster, observed his cousin, Velino Shije Herrera (Ma Pe Wi) of Zia Pueblo while he painted. It was this that stimulated his interest in art. He painted extraordinarily little during the 1950s to the 1970s while pursuing his academic degrees but began to paint again at some time after that. Because of his many and varied interests, Toledo never produced a large quantity of paintings.

The Museum of Indian Arts and Culture mounted a retrospective of his works in 1994, just months before he passed away. Toledo followed traditional pueblo subject matter in many of his paintings-single or group dance figures and village scenes. Usually, the dance figures show a great deal of activity. Generally, he did not paint background scenes, just the flat figures against a plain background. Good rich coloring appears in his paintings.

José Rey Toledo (1915-1994) *Towa was a very well-educated person. He had attended the Albuquerque Indian School in the 1930s, then went to the University of New Mexico from which he obtained a Bachelor of Arts degree and continued to obtain a Master of Arts at UNM by 1955. After graduating from UNM, he served as head of the art department at the Santa Fe Indian School. He obtained a Master of Public Health degree from the University of California Berkley in 1972.

*Towa or Jemez: the language spoken by the Puebloan people of Jemez.