The Maria Martinez and Popovi Da collaborative period was from 1956 to 1970 and is recognized as the highest level of creativity and genius by this talented mother and son team.  Popovi was not content to reproduce the same patterns over and over that preceded his entry into pottery design.  He was talented and creative and wanted to experiment and express himself. He improved firing techniques, added sienna color to his pottery, achieved higher perfection than before by any potter, and added new designs.

Popovi's wife, Anita, stated that "He was a born artist.  Because of his high standards—seeking perfection in his material, in craftsmanship, and in design—his output was limited.  Other factors in the limited output were his desire to further his mother's work; time spent for the welfare of his people; and public appearances as an internationally known ceramist and watercolor artist." Spivey,2003 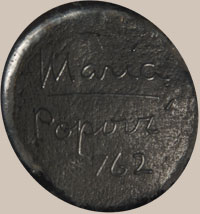 He worked with Maria in all aspects of pottery preparation and their pieces were co-signed. It was his intent to assist his mother and not to take away from her attention that kept him from making pottery on his own.  He was going to pursue his career after his mother was no longer making pottery.  Unfortunately, he passed away in 1971.  It was, at that time, that Maria retired.

Examples of pottery by Maria in collaboration with others, such as her husband Julian, her daughter-in-law Santana and her son Popovi Da, are all illustrated under Maria Martinez's name.