Patrocino Barela was a self-taught wood carver. Because of the religious nature of his subjects he was called a santero, but he did secular work too. His work was shown at the Museum of Modern Art in New York with other artists of the Federal Art Project and he was feted as "a discovery." He was the first Mexican American artist to receive national recognition.[1]

Patrociño Barela, also known as Patrocinio Barela or Patrocino Barela (1908-1964) may have been born in 1900 or 1904 as Barela was never that definite about his early life. His mother died early but whether it was when he was four or earlier is also not clear. According to one version he was found wandering in Denver. Barela did not attend school for more than a few weeks and was not able to write. He worked as a steelworker, miner and on the railway and as a farmhand. In 1930 he married a widow and eventually with her had three more children (giving them seven in total).[2] 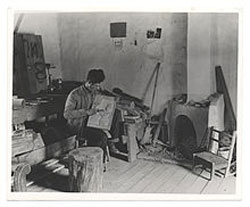 He found his calling as a carver of sacred objects in 1931. He repaired a figure of St Antonio and he later recounted that he knew that someone was going to make 20 dollars from his work, and he was promised five. Although the five dollars never appeared, Barela realized that his work had value and he continued to make figures. He was taken on by the Works Progress Administration working with a horse and cart. His carvings were spotted, and he was set to do those instead, eventually as part of the Public Works of Art Project. Because he was illiterate, he was given a sheet filled with squares to which he would add a cross every day to record his work. This was in 1935 and eventually his work was exhibited at the Museum of Modern Art but he had no ambition to see the eight objects chosen as part of a Federal Arts Project exhibition there.[3] He was lauded by the museum as "the most dramatic discovery" and he was called "discovery of the year" by Time magazine.[4]

He was discovered and was regarded almost immediately as a leading artist with his fluid sculptures carved from juniper wood.[5] Barela's carvings found willing buyers but Barela was not a willing seller. He spent a great deal of time drinking and he would sell his work in small deals. He was driven to carve, and he chose subjects from the Bible or imaginary subjects which usually had a spiritual nature.[2]

Barela died in a fire at the age of 64. His body was found in the corner of his studio after a fire overnight and it is presumed that inebriation combined with wood shavings and his own cigarette had created the fire.[2] He was living at his studio in Cañon, near Taos, New Mexico still poor and illiterate but famous. His legacy is well regarded - The Taos art colony regard him as the first Mexican American artist to receive national recognition.[1]

The largest collection of his work is at the Harwood Museum of Art in Taos, part of the University of New Mexico. His other legacy is the family of artists including children and grandchildren, Luis and Carlos Barela, who carry on the tradition.[4]

Text and Artist Images Source: Wikipedia and as mentioned above