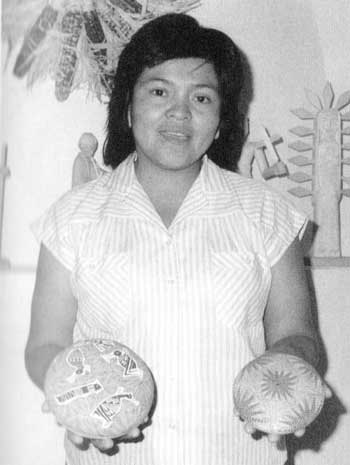 Rebecca Lucario is recognized as one of the top Pueblo Indian potters. She says that she loves making pottery, because "it makes me create and use my imagination."  Rebecca is the daughter of Katherine Lewis of Acoma Puelbo and sister of Carolyn Concho, Marilyn Henderson Ray, Judy Lewis, Diane Lewis, and Bernard Lewis.

The quality of the pottery by Rebecca Lucario (1951- ) is exceptional in form and design. She has won numerous awards, including Best of Division and Best of Show at the Santa Fe Indian Market (1991, 1994, 2000) and the Gallup Inter-tribal Indian Ceremonial (2000). She is best known for two styles: Mimbres Revival pots covered with animal designs, and Optical Eye Dazzlers. Her work is highly sought after by collectors.