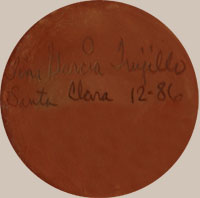 Tina Garcia (1957 - 2005) was from both Santa Clara Pueblo and Ohkay Owingeh (formerly San Juan) Pueblo. She was the granddaughter of Severa Tafoya and Cleto Tafoya; daughter of Lydia Tafoya and Santiago Garcia.

Some of Tina's earlier pots were signed Tina Garcia-Trujillo or Tina G. Trujillo. After her divorce, she went back to signing her pots, Tina Garcia. Even today, Tina is still best remembered for her large, classic water jars with tall necks and sometimes fluted rims.