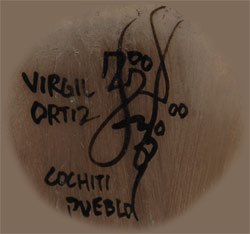 Cochiti Pueblo artist Virgil Ortiz is probably one of the most versatile of all pueblo potters. He makes traditional figurative pottery, experimental figurative pottery, traditional pottery vessels, and even designer clothing. Collectors are fortunate that Virgil has such a fertile mind and has chosen to express his talent by first making pottery. He is so talented that he cannot be confined in only one medium and has expressed his talent in jewelry and fashion to name just a few.

Virgil Ortiz (born 1969) has an artistic eye unlike any other pueblo artist I know. He must thoroughly enjoy fashioning figurines and I can imagine him with a smile as he thinks of how to dress them and how to design the decorations. He must achieve a feeling of pleasure on completing one. If he enjoys his creations as much as collectors do, then he must be a happy artist.

He started making pottery at age 6 and still occasionally finds time to do more, but his life of producing designer clothing, videos, photographs, and making jewelry leave very little time to pursue his earlier career of pottery production.

His mother, Seferina Ortiz, encouraged her son to make traditional Cochiti Pueblo pottery, but he chose to go more modern. He has produced figurines ranging from scantily-clad females, males with nipple rings, two-headed people, females dressed in long leather dresses, etc. At the same time, he has formed traditional shaped jars, but his decorations have deviated from the traditional.