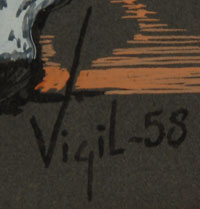 Frank Paul Vigil (1922-1973) was a Jicarilla Apache from the reservation in Dulce, New Mexico.  His art has been exhibited at a number of venues, some of which are Arizona State Museum, Heard Museum, Gallup Inter-tribal Indian Ceremonial, M.H. De Young Memorial Museum, New Mexico State Fair, Philbrook Art Center, and the United States Department of State.  He received awards from the De Young and Philbrook.

His art is represented in collections in the U. S. Department of the Interior, Denver Art Museum, Museum of Northern Arizona, Southwest Museum and the Southeast Museum of the North American Indian.  He is published in Southwest Indian Painting: a Changing Art by Clara Lee Tanner.