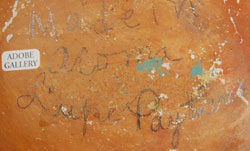 Acoma Pueblo artist Lupe Paytiamo was a pottery innovator while trying to be traditional at the same time. Just one example is the addition of a "pie crust" rim on a serving bowl was an innovation made for attracting the attention of a buyer. Bowls used in the pueblo household did not contain such a rim.

The post-World War II period witnessed potters at Acoma and Laguna making movements to increase sales to the travelers coming to the Southwest following years of gas rationing during the war period. It was a competitive market of selling to traveling tourists, galleries and shops in Santa Fe and Albuquerque, and to individual collectors. Lupe Paytiamo took advantage of the opportunity to be one of these innovators in Pueblo pottery making.

She seemed to be most active in the 1960s. She would sign her pottery "[Date, Year] Made in Acoma Lupe Paytiamo."