Award-winning artist Myron Denetclaw is a Diné of the Navajo Nation Painter. He is self-taught artist. His interest in the traditional teachings and respect for the Navajo culture inspires him to learn the significance of their ceremonies.

Denetclaw developed his painting ability slowly through trial and error by practice of drawing.  He holds in particular esteem the naturalism of Bob Ross’ work which is a significant force characterized by an ongoing determination to produce beautifully rendered gouache and acrylic paintings with a specific emphasis on Yeíí, the Diné Deities. Denetclaw’s interest in the elegance of the spiritual world finds expression within his figurative subjects, the intimacy of which invites us to reflect freely upon their narrative content.  He paints in the style of the early Navajo painters Harrison Begay and Beatien Yazz.  There are not many young Navajo artists today who paint in this style.  His work is clearly influenced by his predecessors, while expanding on their style in a way that only a young artist would.  We are very impressed by this emerging artist's work, and are excited to be able to share it with our clients.

Denetclaw’s interest in the traditional teachings and respect for the Navajo culture inspires him to learn the significance of the winter 9 night Yeíí ceremony.  He believes by painting his interpretation of the ceremony, he will help preserve the tradition for future generations.

Denetclaw was invited by local Navajo artists: James King, Keno Zahney, and Eugene Joe to paint his rendition of the Yeíí-Bi-Cheí mural on the Arts and Crafts building at the 2011 Northern Navajo Fair but now long gone.

Denetclaw exhibited his paintings at several student art shows and has been recognized for his work:

·       At just 15 years old, he received a Best of Show award in the 2015 Heard Museum Guild American Indian Student Art Show & Sale. This art was selected to be presented on greeting cards.

He was featured in the Shiprock Historical Society Magazine as an upcoming artist in October 2012.

The next challenge for Denetclaw is to refine his technique, establish his style of paintings, and learn to market his work. He was invited by us, Adobe Gallery, in Santa Fe, NM to participate in the annual Paint and Sculpt Out on Canyon Road in October 2015 and October 2016. This was a positive experience where he interacted with people interested in fine art and explained the significance of his paintings and sold a painting to the gallery.  Canyon Road sponsors a Paint Out every October for artists to set up their easels in front of the gallery which represents their work.  Since we generally do not represent any living artists, we had not participated in the Paint Out until three years ago when we were contacted by the mother of a Navajo young man in high school who asked if her son could set up and paint in front of Adobe Gallery.  We agreed.  This young man, Myron Denetclaw, has now set up in front of the gallery for the last several years.

Denetclaw is a college student studying fine arts with an emphasis on studio arts.

Myron Denetclaw, Watercolor and Acrylic on Matte Paper, Indian School Style or Flat Style, Diné - Navajo Nation, Adobe Gallery: He is a natural born artist and has not received any structured or official training as a painter.  Chooses to paint in the Indian School Style or Flat Style that was started in the early 1900’s, first by the San Ildefonso Day School and then at the Santa Fe Indian School in the 1930s.  A Native artist, he is from the Navajo Nation.  Recent ribbon winner at the New Mexico State Fair - won BEST OF SHOW. “First time have I painted horses and wildlife... entitled “Nightway: Ceremonial Hunt”. Three Navajo hunters galloping after three deer for their uses in making sacred masks and bundles, used in 9-day winter rites. 18 × 25 inches, framed, acrylic on matte paper studio arts (see this painting image below - the one with the BLUE RIBBON). 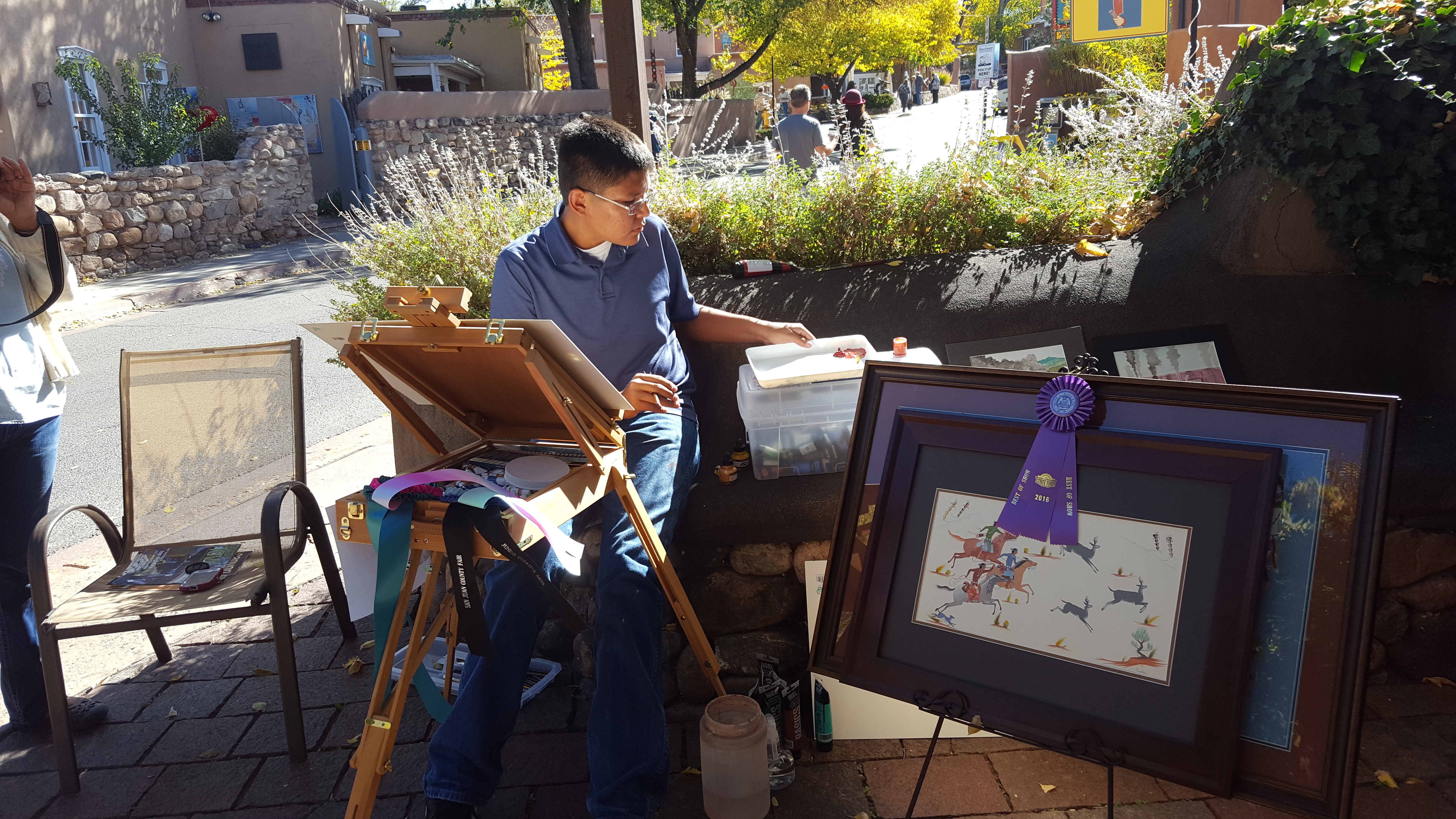