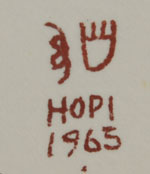 Oswald Fredericks (1905-1996) Kucha Honowah - White Bear spent most of his life as a Hopi artist and storyteller working for various youth organizations. One of his accomplishments was the carving of the Goldwater Kachina Collection which now resides at the Heard Museum in Phoenix. His second major accomplishment was collecting oral histories of Hopi people. These oral histories were the basis of Frank Waters' Book of the Hopi.

White Bear was born in Old Oraibi on February 6, 1905 to Charles and Anna Fredericks. He attended the Oraibi Day School, was sent to the Phoenix Indian School then on to Haskell Institute in Lawrence, Kansas, and Bacone College in Muskogee, Oklahoma. From this point he moved to New York, where he taught Indian Lore to the Boy Scouts. He then became the head instructor for arts and crafts for the YMCA in New Jersey and spent time at Shawnee-on-the-Delaware as a workshop instructor in Indian music.

In 1950 he married and they moved to New Oraibi and stayed in the home of his clan aunt, Elizabeth White Polingaysi. Here they took over his Aunt's business of boarding visitors and researchers. Unfortunately, very few visitors came to lodge with them, so White Bear and his wife returned to Phoenix in 1952. He returned to work as an instructor of arts and crafts for the Phoenix Boys Club. Because of his talent, he was in great demand for Hopi crafts, especially his Kachina dolls. White Bear remained an instructor until 1959.

It was during the late 1950s that White Bear convinced Fredrick Howell, director of the Charles Ulrick and Josephine Bay Foundation, to underwrite a history of the Hopi people. Howell approved the idea and, eventually, Frank Waters was chosen as the writer to work with White Bear.

White Bear's role in the project was to record and transcribe oral histories gathered from Hopi elders. It is from this information that Frank Waters compiled his Book of the Hopi in 1963. The book was quite popular, drawing interest from the public and Hopi alike. Within the book was the myths of the Hopi and general information on their clans and rituals. This book became quite popular with the alternative movements of the 1960s and led to many pilgrimages to Hopi, and even unwanted settlement. Today, the book still holds favor with the New Age crowd, stimulating pilgrimages to Hopi from all over the world, especially German.  The original 72 paintings and drawings by White Bear for Waters’ book are now in the Museum of the American Indian.

In his later years, White Bear continued his reputation as a top artist and as a teacher of Hopi culture. He shared his art and his knowledge with the world through public presentations in the United States and Europe. For many years he could be found exploring the backcountry of Hopi and the Verde Valley in search of answers to Hopi prophecy. White Bear died on February 6, 1996.