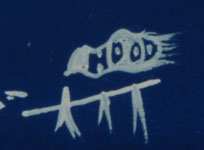 Rance Hood (b.1941 - ) Au Tup Ta - Yellow Hair has had a varied job career—mill worker, oil field worker, designer, sculptor and painter.  He received a commission from Turbo West Aircraft Company for an exterior design for the Cheyenne III jet aircraft.  He also received a commission from the Comanche Nation to design a commemorative emblem and medallion, and a commission from Comanche County, Oklahoma, for a directory cover. These commissions serve as proof of his recognized talent as an artist. Publications in which he has been featured and exhibits of his art are much too numerous to list here.  It suffices to say that he is a talented Oklahoma artist and has received such recognition.