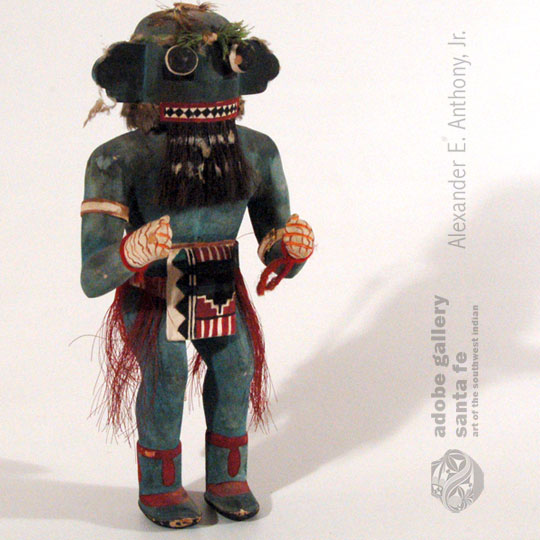 The Hopi Hú Katsina and the Sakwa Hu Katsina are quite different.  The Sakwa Hu(Sakwa designating the directional color blue) is an old Katsina that has appeared with a great deal more frequency on Third Mesa.  "He is most often portrayed by a small boy and accompanies the procession of the chief kachinas about the village as a guard during the Powamu in February." Wright 1973

The Hú Katsina is a participant in the initiation ceremony of young boys.  The Crow Mother and her two sons, the Hu Katsinas, come to the kiva and give the initiates four strokes with their yucca whips.

This Sakwa Hu Katsina doll is an exceptional representation of the actual Katsina as it appears in reality.  His body is painted blue and he has a long beard and red hair skirt. His moccasins are blue. A pair of grouped feathers is tied to the top of the mask, however, one of them is missing the feathers in this instance.  This Hopi Pueblo carving appears to be circa 1950s.