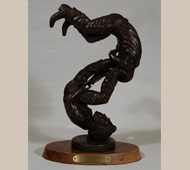 Each year Hopi women take part in a ceremony called the Basket Dance during which possessions of increasing value are discarded and fought over by a waiting crowd of male spectators. Objects of lesser importance, like tennis shoes or plastic dishware, are the first items to be thrown out. But as the dance progresses, the objects become more valuable. Woven baskets and plaques made by the women are the last to go and are fought over with the greatest intensity, as evidenced in the spinning combatants depicted in "Hopi Conflict."

The original wood carving for this bronze was so precisely balanced that it stood independent of its base and was formed from one twisted piece of cottonwood root.

This limited edition bronze of Hopi artist Lowell Talashoma, Sr. is the manifestation of an artistic eye and vision that spans two cultures, for Lowell was unusual in having spent many of his childhood years in the care of foster parents who raised him in a mainstream American home. Becoming Hopi meant for Lowell Talashoma, Sr. accepting a new reality and set of beliefs as well as coming to understand the traditions, ceremonies, languages and social customs implicit in his choice. Giving form to this historically-rich culture was a task Lowell set for himself with pleasure and excitement, what is ancient and inherently true to the Hopi people was newly rediscovered and revered through Lowell's dawning awareness of what it was to be Hopi.

Each form and figure tells a story as does the process Lowell employed in its creation. His images were inspired by Hopi beliefs and were "liberated" from cottonwood root-the Hopi traditional carving material-through Lowell's vision of what lay within. Although he could have worked faster in preparation for bronzing by using wax or clay, Lowell preferred to interact with the wood, a material he respected for its life character. The castings made from his carvings via the lost wax method retain that spirit. Even the grain of the original wood can be discerned in the finished bronze.

Take notice in this bronze that the two Hopi young men are tussling over a Hopi basket, the most prized of all the thrown gifts during the basket dance.

This bronze of "Hopi Conflict" was cast in an edition of 35 of which this is number 1. It was completed in 1982.

Condition: original condition with slight abrasion to the wood pedestal
Provenance: from the estate of a California family