On another planet at another time, some say, Eototo and Aholi were inseparable friends. The two personalities retain that proximity as Hopi Katsinas and continue to work together at ceremonies that link the earth and its inhabitants with other forces in the universe.

Eototo is chief among the katsinas. With his second-in-command Aholi, he played a historically vital role in the great 17th century pueblo revolt. Quintessentially Hopi, each nonetheless possesses attributes or characteristics that seem to echo those of other religions' saints or priests. Aholi's cone-shaped head and staff recall the appearance of Christian bishops in ceremonies and Aholi's repeated chanting of his own name resembles the rhythms of a different liturgy. These non-coincidental cultural reverberations blend mockery and tribute with an overwhelming Hopi sense of the inter-connectedness of all things.

The limited edition bronze sculptures of Lowell Talashoma, Sr. are the manifestations of an artistic eye and vision that spans two cultures, for Lowell is unusual in having spent many of his childhood years in the care of foster parents who raised him in a mainstream Mormon home. Becoming Hopi meant for Lowell accepting a new reality and set of beliefs as well as coming to understand the traditions, ceremonies, languages and social customs implicit in his choice. Giving form to this historically-rich culture is a task Lowell set for himself with pleasure and excitement; what is ancient and inherently true to the Hopi people is newly rediscovered and revered through Lowell's dawning awareness of what it is to be Hopi.

Each form and figure tells a story as does the process Lowell employed in its creation. His images were inspired by Hopi beliefs and were "liberated" from cottonwood root-the Hopi traditional carving material-through his vision of what lies within. Although he could have worked faster in preparation for bronzing by using wax or clay, Lowell preferred to interact with the wood, a material he respected for its life character. The castings made from his carvings via the lost wax method retain that spirit.

This bronze sculpture of Aholi and Eototo Katsinas was cast in 1982 by the lost wax method in an edition of 35 of which this is number 1.

Condition: original condition
Provenance: from the estate of a California family. There are six bronze katsina sculptures by Lowell Talashoma in this estate which all are numbered 1 of 35. The family apparently had connections with the foundry to acquire the first casting of each of the six. The others which are available are shown below in related items of interest.
Recommended Reading: Beyond Tradition: Contemporary Indian Art and Its Evolution [Paperback Edition] by Lois Jacka, et al. 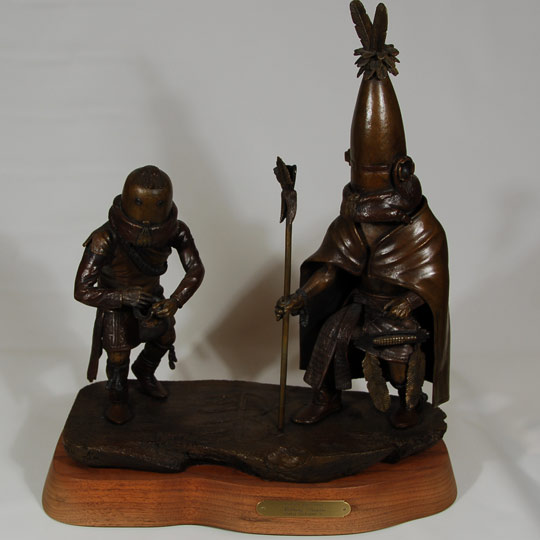