This bronze of a Talavai (Morning) Katsina is entitled "For a Better Brighter Tomorrow" and is the representation of a Hopi Katsina. In the early morning, as the sun bursts from behind the hills in Hopi lands, morning songs spread their sound: calling birds, barking dogs, and the raised, bell-like voices of early risers greet the new day. The spruce, the first tree touched by the sun's rays, turns from dark shadow into green life with the illumination.

The symbols of the Morning Katsina-his bell that serves to rouse its hearers to a new day, the young spruce tree representing a new beginning, and the headdress feathered out like rays reaching in all directions-all recall the dawning of hope and excitement for a better, brighter tomorrow.

This limited edition bronze by Hopi artist Lowell Talashoma, Sr. is a manifestation of an artistic eye and vision that spans two cultures, for Talashoma is unusual in having spent many of his childhood years in the care of foster parents who raised him in a mainstream American home. Becoming Hopi meant for him accepting a new reality and set of beliefs as well as coming to understand the traditions, ceremonies, languages and social custom implicit in his choice. Giving form to this historically-rich culture is a task he set for himself with pleasure and excitement: what is ancient and inherently true to the Hopi people is newly rediscovered and revered through Talashoma's dawning awareness of what it is to be Hopi.

Lowell Talashoma became a very famous carver of one-piece cottonwood katsina dolls and was selected by American Indian Life and Legends, Ltd as one of two Hopi artists to convert cottonwood katsina dolls into everlasting bronze sculptures. Each of these bronzes was inspired by Hopi beliefs and is "liberated" from cottonwood root-the Hopi traditional carving material-through the vision of the artist of what lies within. Although he could work faster in preparation for bronzing by using wax or clay, Talashoma preferred to interact with the wood, a material he respected for its life and character. The castings made from his carvings via the lost wax method retain that spirit. Even the grain of the original wood can be discerned in the finished bronze.

This bronze of the Morning Katsina was cast in an edition of 35 of which this is number 1. It was completed in 1980. The pedestal on which the bronze stands is on a turntable system to allow for the bronze to be viewed in various positions. 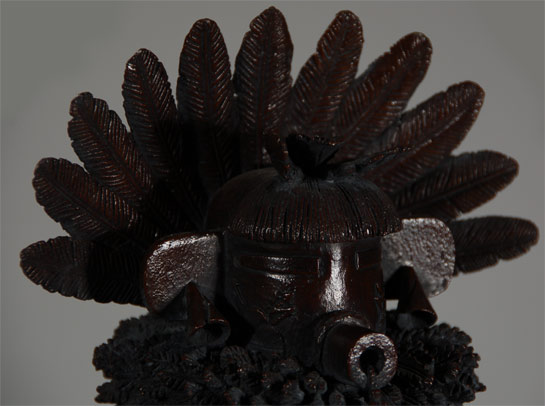