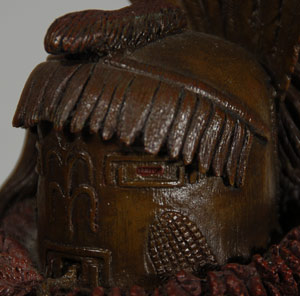 This bronze of a Tasap-Navajo Yei-bi-chai Katsina is entitled "Spiritual Peace" and is the representation of a Hopi Katsina in honor of the Navajo people. It is a silent figure and steps forward to lead others in ritual dance steps.

This katsina stands for the complex and often embittered relationship existing between the Navajo and Hopi tribes who share traditional lands in northern Arizona. His Navajo mannerisms and appearance are sometimes comical to the Hopi people. Still, with a longing recognizable as universal, he expresses the desire for peace, order and spiritual unity that comes from settling disputes between discordant neighbors.

The Tasap Yei-bi-chai Katsina is the Grandfather of the Navajo Katsina and appears during the Navajo Katsina Dance. He does not speak but pantomimes whatever he wants. He starts the dance, acting as a leader in both singing and dancing. His dance step is an exaggeration, and a very lively one, that may be interspersed with a comic action such as a request for food-mountains of food. All of these requests are done in pantomimes that bring laughter to the audience.

This bronze was sponsored by American Indian Life and Legends of Arizona who produced a number of bronzes of Katsinas by Lowell Talashoma, Sr. and Neil David, Sr. The company is now out of business and all the bronzes are available only through resale.

This bronze and others by Talashoma are the manifestations of an artistic eye and vision that spans two cultures, for Talashoma is unusual in having spent many of his childhood years in the care of foster parents who raised him in a mainstream American home. Becoming Hopi meant for him accepting a new reality and set of beliefs as well as coming to understand the traditions, ceremonies, languages and social customs implicit in his choice. Giving form to this historically-rich culture is a task Talashoma set for himself with pleasure and excitement; what is ancient and inherently true to the Hopi people is newly rediscovered and revered through his dawning awareness of what it is to be Hopi.

Each form and figure tells a story as does the process Talashoma employed in its creation. His images were inspired by Hopi beliefs and are "liberated" from cottonwood root-the Hopi traditional carving material-through Talashoma's vision of what lies within. Although he could have worked faster in preparation for bronzing by using wax or clay, he preferred to interact with the wood, a material he respected for its life and character. The castings made from his carvings via the lost wax method retain that spirit. Even the grain of the original wood can be discerned in the finished bronze.

This bronze was cast in an edition of 35 of which this is number 1. It was completed in 1982. This Katsina doll was awarded 1st Place, Best of Class and Best of Show at the 1982 New Mexico State Fair. It received 1st Place and two special awards from the Heard Museum Guild and also 1st Place and Best of Class from Sandra Day O'Connor O'odahm Tash. The wood pedestal that supports the bronze is on a rotating base so that the bronze may be rotated and viewed from various positions.