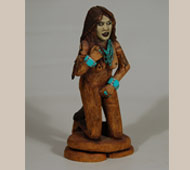 This sculpture is of a Female Skinwalker, which, in Navajo legend, would be much rarer than a male Skinwalker. There are several varieties of Navajo witches, one of which is using his (rarely her) powers to travel in animal form. In some versions, men or women who have attained the highest level of priesthood are called "pure evil."

They are human beings who have gained supernatural power by breaking a cultural taboo. Specifically, a person is said to gain the power to become one upon initiation into the Witchery Way. Both men and women can become skinwalkers, but men are far more numerous. It is generally thought that only childless women can become witches.

Larry Jacquez (pronounced Hackus) is a Navajo folk art carver who specializes in the unusual. He is known to have carved and painted extraordinary objects, accurately depicting the Yeis, Navajo mythology, and the dances and escapades of skinwalkers. The Rosenaks stated that they were surprised by the appearance of skinwalkers in his work, and doubtful of their very existence, but Jacquez told them that "evil witches do exist."

Some Navajo also believe that skinwalkers have the ability to steal the "skin" or body of a person. The Navajo believe that if you lock eyes with a skinwalker, they can absorb themselves into your body. It is also said that skinwalkers avoid the light and that their eyes glow like an animal's when in human form, and when in animal form their eyes do not glow as an animal's would. Some Navajos believe that if you make eye contact with a skinwalker, your body will freeze up due to the fear of them and they then use that fear as energy against the person.

A skinwalker is usually described as naked, except for an animal skin. Some Navajos describe them as a mutated version of the animal in question. The skin may just be a mask, like those which are the only garment worn in the witches' song.

This carving of a female skinwalker is naked as skinwalkers are thought to be. She has the body, from the waist down, of an animal including a tail. She is elaborately decorated with turquoise jewelry. Her face is painted a ghostly white.

Condition: very good condition with only one string on the right bicep partially missing.
Provenance: from the collection of Jan and Chuck Rosenak
Recommended Reading: Navajo Folk Art by Chuck and Jan Rosenak
Referenced Material: the information on female skinwalkers was excerpted from the online source of Wikipedia.