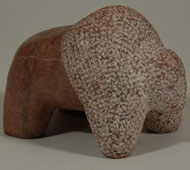 Bob Haozous is a Warm Springs Chiricahua Apache Indian and the son of famous sculptor Allan Houser. Haozous has major art sculptures in two dozen cities in the United States and Europe. He has been included in many exhibitions, numbering over two dozen. He is recognized as a major American Indian artist of the 20th century.

This small American bison was carved from Tennessee limestone. The body of the bison is highly polished and the hair section was achieved by pecking at the stone with a sharp instrument. The sculpture is signed on the underside B Haozous. It is not dated. According to the owner, it dates to the mid-1980s.

Provenance: from the collection of Michael Hamilton, manager of the Case Trading Post, Wheelwright Museum in Santa Fe from 1978 to 1998.