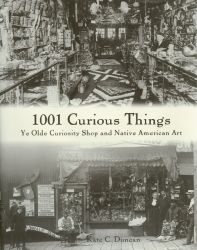 For more than one hundred years, tourists and residents alike have flocked to Ye Olde Curiosity Shop, located on Seattle's waterfront. The guestbook records visits by Theodore Roosevelt, Will Rogers, Jack Dempsey, John Wayne, and Queen Marie of Romania, among many others.

Ye Olde Curiosity Shop was founded in 1899 by Joseph E. Daddy Standley, an Ohio-born curio collector who came to Seattle in the late 1890s just after the Yukon gold rush. Although Native American material vied for space with exotica from all corners of the globe, it soon grew to be the mainstay of the shop, which became identified with the whalebones displayed outside and the piles of Eskimo relics within. There were also baskets, moccasins, ivory carving from Alaska, Tlingit spruce root baskets, Haida jadeite totem poles, masks, paddles, and other curiosities from the Northwest Coast. Indians from the Olympic Peninsula brought baskets, coming up to the back door of the shop in their canoes. Nuu-chah-nulth from British Columbia, who lived on the flats not far from the shop, carved miniature totem poles by the hundreds and full-sized poles on commission. Trading companies supplied Indian curios from the Plains, the Southwest, and California.

An art historian trained in the classic arts of the Northwest Coast, Kate Duncan became interested in the history of the shop when she learned that it had not only been an active participant in Seattle's 1909 Alaska-Yukon-Pacific Exposition but had also been a source for important Northwest Coast and Arctic collections in the Royal Ontario Museum, the National Museum of the American Indian, the Newark Museum, the American Museum of Natural History, and others. Shop catalogs, beginning in 1910, trace merchandising of Native American art during the first decades of the twentieth century. Granted full access by the present owner's grandson and great-grandson of “Daddy” Standley to remarkably complete archives maintained from the time the shop opened, she has provided a many-faceted study of one curio shop and its influence on Native American art of the Pacific Northwest and Alaska and a fascinating chapter in the history of Seattle.