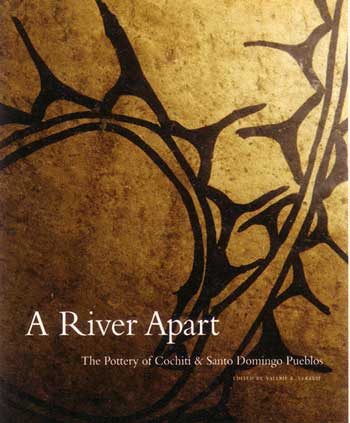 A River Apart presents multi-vocal perspectives on the pottery of Cochiti and Santo Domingo Pueblos, located along the central Rio Grande Valley in New Mexico. Separated by a great river, Cochiti and Santo Domingo Pueblos shared a ceramic tradition for centuries until increasing contact with outsiders ushered in tumultuous changes that set the pueblos on divergent paths. Cochiti Pueblo more freely modified its traditional forms of painted pottery to appeal to new markets while the Santo Domingo Pueblo shunned the influences of the tourist trade and art market, continuing an artistic trajectory that was conservative and insular.

A River Apart brings together a distinguished a team of anthropologists, artists, and art historians from Native and non-Native perspectives to examine the pottery traditions of the two Pueblos and decipher what discoveries can be made and identities established through these representations of material culture. As the essays reveal, the pottery represents more than anthropology's artifacts and art for the marketplace. From the pottery we learn much about the pueblos' history, myths and legends, communities, and the artist's responses to influences from the outside world. This volume is a fascinating case study in how cultures develop; how art, culture and community are interwoven; and how art is created, interpreted, valued, bought and sold.

This publication is companion to an exhibition to open at the Museum of Indian Arts and Culture (Museum of New Mexico) in Santa Fe in Fall 2008 and featuring over 200 Santo Domingo and Cochiti pots. A River Apart is a valuable addition to the libraries of those interested in Pueblo Indian pottery, Native American arts and culture, and southwestern history and anthropology.

A RIVER APART, The Pottery of Cochiti & Santo Domingo Pueblos

Published in association with the Museum of Indian Arts and Culture, Santa Fe, NM.