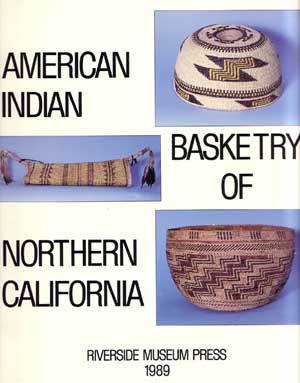 This exhibition and catalog mark the final phase in a three-part project to exhibit and publish the Riverside Museum's collection of California Native American baskets. In 1982 Rods, Bundles & Stitches A Century of Southern California Basketry (Lopez and Moser 1981) began the project and demonstrated that there was considerable interest in California Indian basketry. That catalog is now, in 1989, out of print with a revised edition planned for re-publication. Our initial success was followed with the 1986-1987 exhibit and catalog of over 300 Central California Indian baskets (Moser 1986) which has also proven to be very popular. In fact, the exhibit was extended an extra six months to accommodate public demand and nearly half of the press run of 2,500 copies of the catalog have been sold at what is near or below printing cost prices thanks to the generous support of the National Endowment for the Humanities (NEH) publishing grant. The funds generated from these two previous NEH funded books have been utilized by Riverside Museum Press (a non-profit arm of the Riverside Museum Associates) to publish this final volume on California Indian basketry in the Riverside Municipal Museum (RMM) collection. It is my hope that it will stand as a special tribute to the Native American women who made these wonderful baskets, to the collectors who