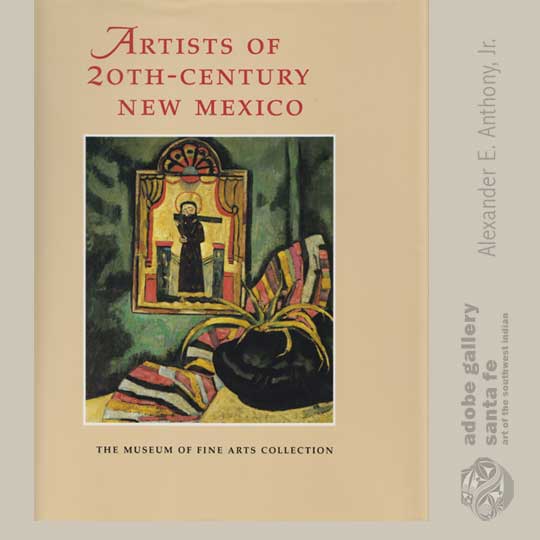 “The Museum of Fine Arts opened its doors to the public in 1917, showing paintings by several celebrated artists of the day, including Robert Henri, Oscar Berninghaus, William Penhallow Henderson, Carlos Vierra, and Julius Rolshoven.  Many artists who gained recognition for their work elsewhere came to New Mexico, bringing with them a broader, more sophisticated context for approaching art than was indigenous here. They included Georgia O’Keeffe, John Sloan Agnes Martin, Bruce Nauman and Paul Caponigro.  Still other artists represented in the collection, such as Paul Cézanne, Alfred Stieglitz, Diego Rivera, and Harry Callahan, never set foot in New Mexico, and yet their work has strongly influenced art produced here. And there are masters such as the great landscape painters of the nineteenth century, Albert Bierstadt and Thomas Moran, whose vision of the West influenced a generation of early Taos painters pursuing similar subject and approach.

“From the controlled and elegant canvases of the early genre painters through every significant art movement that has touched art-making in America, the Museum of Fine Arts has kept New Mexico at the center of the nation’s collective urge to express itself artistically.  Is is today among the finest public museums in any region.”

A Place for the Museum of Fine Arts

Selections from the Museum of Fine Arts