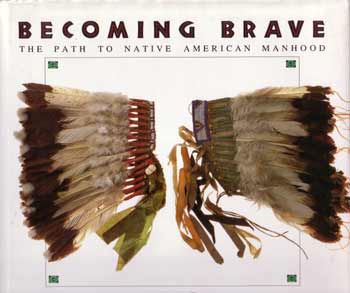 From the Inside Front Cover

In a place and time when existence depended on physical skill, hunting and warfare held vital importance. Native Americans believed that being a good man meant, above all, being a brave warrior. From earliest childhood, boys played with miniature bows and arrows, hunting small game and mounting make-believe war parties. When they grew to manhood they donned intricately decorated war shirts and feathered headdresses, and set out to prove their bravery.

Pictured here are the war shirts, tomahawks, peace pipes, spears, drums, and headdresses that were part of daily life for Native American men. Functional as well as beautiful, these objects are unsurpassed in ,design and craftsmanship. Four vivid, first-person accounts of Indian life accompany the stunning photog raphy The first two stories, about a traditional buffalo hunt and a fourteen-year-old's dramatic debut in battle with another tribe, come from the pinnacle of the Plains 'Indian culture. As the United States made its implacable advance into Indian territory, warfare inevitably evolved from ritual forays into rout and slaughter. The two final stories tell of the Battle of the Little Bighorn - when the Sioux repelled a surprise attack by U.S. soldiers and killed General Custer - and the 'massacre at Wounded Knee, which ended all battles and sealed the Indians' fate.