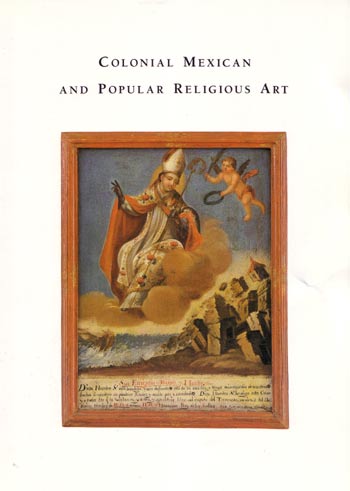 All of the works presented here reflect the spiritual legacy of the Christian conquest by Spain of the great Aztec (Mexican) empire, known today as Mexico. But, remarkably, none date from the sixteenth century, the era of the Conquest, and only a few date from the following centuries of the Colonial period. It is a measure of the Conquest's influence that each of these works, including the most recent small paintings from the twentieth century, still resonates with its power.

This legacy took form in a new and original religion, Mexican Catholicism, which arose from a synthesis of indigenous ceremonial and religious practices and medieval Spanish religious beliefs and passions. The essential character of the Mexican Church, with its attendant sacred art and peculiar blend of penitential imagery and syncretic ritual and dramatic devotion, is exemplified on an intimate level by the large diverse group of ex-votos (votive paintings) in the collection. These works of art bear testimony to the resolution through religious submission, in the guise of revelation, of the strongest human conflict: the ominous battle between spiritual power and spiritual insecurity, impotence, and loss in the physical world. Echoes of the Conquest and of a new spiritual world, that of New Spain, reverberate in these humble, pious images of faith.