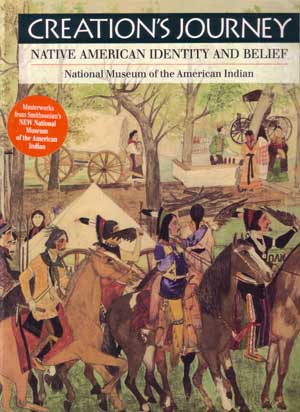 Introduction – a Backward Glimpse through the Museum Door

Giving Thanks for what we Have as Indians

The Symbolism of Feathers

The Legacy of Baskets

Creation's Journey draws on the vast collections of the National Museum of the American Indian to retell stories of native life from the Arctic to Tierra del Fuego and from childhood to old age. Using objects, historical photographs, and the voices of Native Americans past and present, the book reawakens our senses to values, traditions, and beliefs that once prevailed in the Americas—and are still observed in many native homes and communities.

For the first Americans, a record of the past is written in the objects that were a part of daily life. Objects speak about the beliefs of those who made and used them; clothing is a language of vows, of the spirit world, of heroic accomplishments. Creation’s Journey allows these objects to speak again.

Creation’s Journey also shows how traditions endure and evolve. Clothing is still a form of visual prayer; Iroquois children are again wrapped in cradleboards; Kuna women in Panama sew ancient designs into their molas(blouses); on the button blankets of the Haida, Eagles still soar, the Raven mimics them, and Bears stand proud.