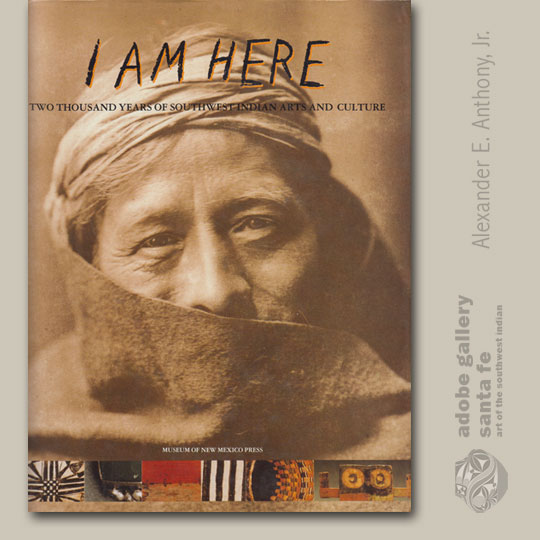 I Am Here presents over 200 objects, nearly half in full color, from the Museum’s vast holdings, arranged along a timeline that begins in prehistory with the Archaic hunter-gatherers.  This prehistoric period, which ends with the first Spanish settlements in 1598, includes plant-fiber baskets from a thousand years before the Christian Era, as well as some exceptional shell necklaces excavated at Chaco Canyon and several fine Mimbres pots that demonstrate the earliest pictorial designs applied to clay.

The second period, spanning three centuries to the opening of the Santa Fe Trail in 1821 and the arrival of the railroad in 1880, traces the profound changes within Native cultures as a result of EuroAmerican influences.  The ancient art of Pueblo weaving declined, but the Athabascan-speaking tribes learned much from their Pueblo neighbors in the area of basket making and weaving. Exquisite examples of early Navajo textiles are presented here, and fine Apache baskets are in evidence.  The introduction of silver, with Spanish coins, had a profound effect on traditional jewelry making, as is abundantly apparent in the elaborately designed and worked pieces included here.

In the third period, beginning with the railroad and advancing into the middle twentieth century, arts and crafts became the mainstay of the Indian economy, and the demands of the tourism industry were strongly felt.  Jicarilla Apache laundry hampers, Navajo silver hairpins, and other commercial wares such as a child’s ceramic train made at Santa Clara at the turn of the century, demonstrate the shift in Indian arts of the period. The flood of mass-produced goods into the territory caused irrevocable changes within Indian material culture.  Weaving, for example, died out among the Eastern Pueblos, and the introduction of commercial yarns and aniline dyes altered Navajo textile arts considerably. But by the 1920s a heightened awareness of the value of traditional Native American designs and practices stimulated a revival in many areas of the arts. This was felt most strongly in pottery, where exquisite examples of this rejuvenation were created by San Ildefonso artists Maria and Julian Martinez and the Hopi potter Nampeyo.

Finally, the art of the Post-1960 contemporary period exhibit continued adaptation and change within a strong traditional inheritance.  Innovation and refinement steadily contribute to the strength and endurance of the arts of the Southwest Indians, who, while heeding their past, live assuredly and responsively in the present.

Museum of Indian Arts and Culture

The Southwest: An Overview by John A. Ware

Pueblo and Athabascan Baskets in the Southwest by Andrew Hunter Whiteford

The History of Southwestern Weaving by Kate Peck Kent