INDIAN KITSCH The Use and Misuse of Indian Images [SOLD] 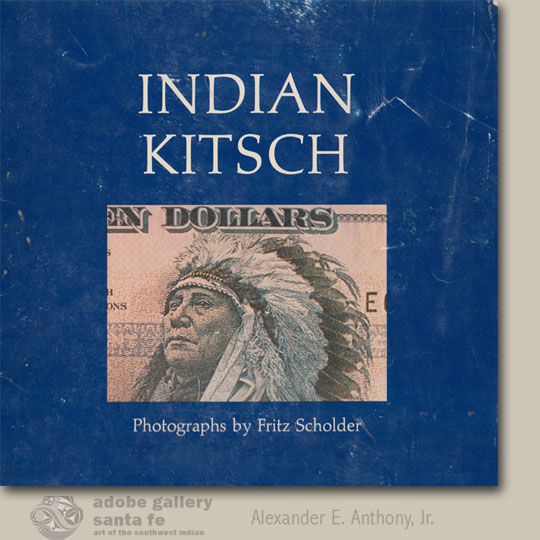 INDIAN KITSCH The Use and Misuse of Indian Images

Published by Northland Press in cooperation with The Heard Museum

“Fritz Scholder is, of course, best known as a painter and printmaker.  Yet the images, sacred and secular, that he is probing in these photographs are not unknown subjects to him.  They were and are ever-present in his paintings and prints.  As in his work in these media, he has sought to focus our attention on the Indian around us —’real, not red.’ By. . .  this publication we are indebted to Scholder for seeking to penetrate our stereotypes of the American Indian.”

THE PHOTOGRAPHS HEREIN are a collection of impressions recorded by Fritz Scholder in 1978. They are neither new to existence nor to Scholder. He, along with every traveler in the American West, has been blinded by the pervasive use and abuse of Indian-ness. And, of course, these are but a few of the thousands of visages that exist of the American Indian.

To my knowledge no one has ever sought to penetrate the many implications of Indian-ness abused - whether by Anglo or Indian. By these photographs and his essay Fritz Scholder seeks to heighten our consciousness of things Indian. He asks us to look again, to search our personal and plural psyche for the whys of this use and misuse.

These photographs were first presented in an exhibition in March and April 1979, at The Heard Museum in Phoenix, Arizona. Following its showing here, the exhibit traveled throughout the state and the nation….