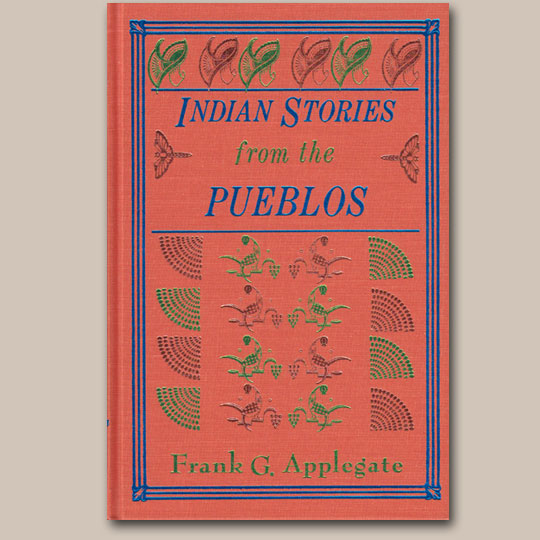 INDIAN STORIES FROM THE PUEBLOS

By Frank G. Applegate with Foreword by Witter Bynner

This Rio Grande Press printing was published in 1977

From the Foreword by Witter Bynner

“Whether these tales Mr. Applegate brings us from the Pueblo Indians of the Southwest relate to their early history or to their present-day doings and feelings, to the early history of Spaniards among them or to the intrusion of later comers from the white world, the substance of most of them and the telling of all of them make living folk-stories.  One who knows Pueblo Indians catches their true accent on page after page of Mr. Applegate’s homely and vivid record.  Bare as the style is, it exerts a spell like the bareness of Indians in one of their apparently simple dance-rhythms.  It is akin to the style of fairy-stories. . .

“One wonders less at Mr. Applegate’s ability to make his informal paragraphs seem to be spoken in an Indian voice, when one knows of his intimate and sympathetic life among the Pueblos.  Not only is he a familiar in the Tewa villages around his home town, Santa Fe, but months at a time he has lived in Hopi villages, lived the Hopi life, felt Hopi feelings, studied and revived Hopi art among the native pottery-makers, painted Hopi persons and ceremonies and listened meantime to such stories as he has caught for us in this volume.  He has caught them as patiently, as gently, as surely, as I have seen an Indian pick up in gifted hands a live woodpecker from a tree-trunk or a live trout from a stream.”

The Artists and the Snakes

The A Little Fish of San Juan

The Turk of Pecos

The Twelve Virgins of Pecos