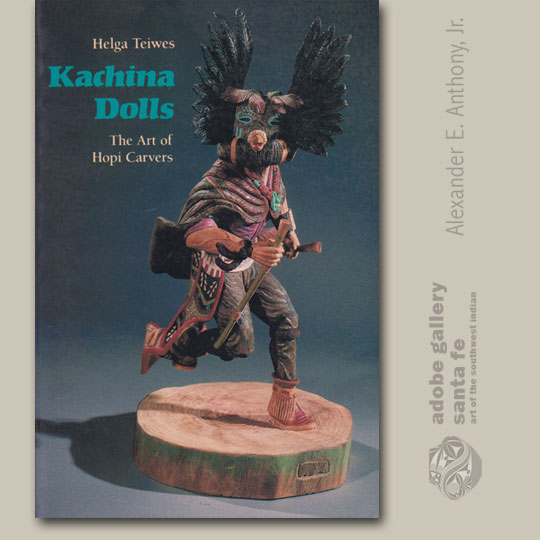 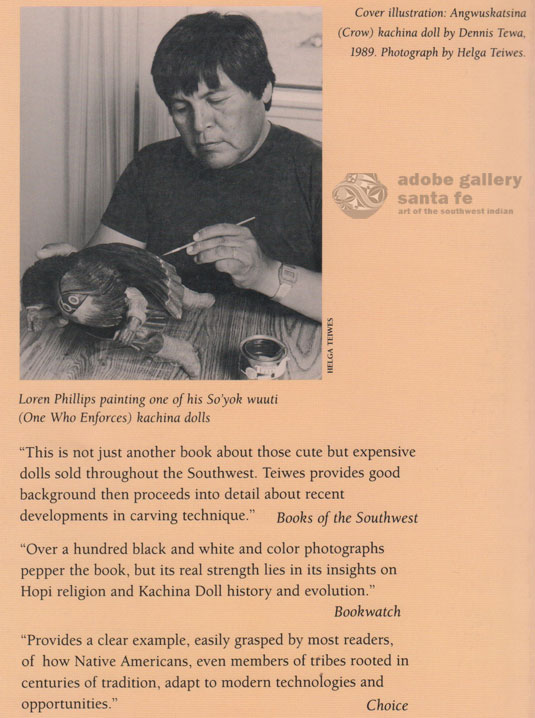 The University of Arizona Press, Tucson

The Katsina Season and Ceremonies

The Antiquity of the Katsinam

The Carver as Artist

Arizona State Museum’s documentation, over many years, of the art of Hopi Katsina dolls and a large number of carvers.  The years of research culminated in an exhibit with the artists showcasing and selling their dolls at the museum.

An excellent documentation of the most important period of doll development and change at Hopi.

Much has been written about the popular kachina dolls carved by the Hopi Indians of northern Arizona, but little has been revealed about the artistry behind them. Now Helga Teiwes describes the development of this art form from early traditional styles to the action-style kachina dolls made popular in galleries throughout the world, and on to the kachina sculptures that evolved in the last half of the 1980s.

Teiwes explains the role of the Katsina spirit in Hopi religion and that of the kachina dollthe carved representation of a Katsina-in the ritual and economic life of the Hopi. In tracing the history of the kachina doll in Hopi culture, she shows how these wooden figures have changed since carvers came to be influenced by their marketability among Anglos and how their carving has been characterized by increasingly refined techniques.

Unique to this book are Teiwes's description of the most recent trends in kachina-doll carving and her profiles of twenty-seven modern carvers, including such nationally known artists as Alvin James Makya and Cecil Calnimptewa. Enhancing the text are more than one hundred photographs, including twenty-four breathtaking color plates that bring to life the latest examples of this popular art form.